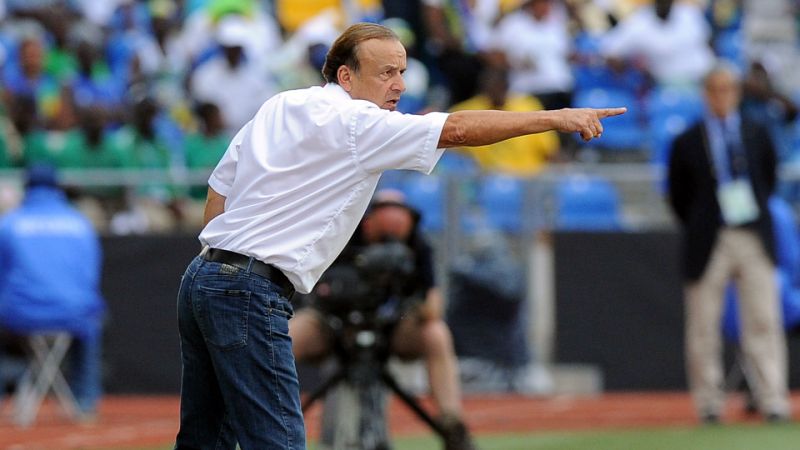 Manager Gernot Rohr has dropped Super Eagles’ captain John Obi Mikel and Ogenyi Onazi from the list of invited players for next month’s all-important 2019 Africa Cup of Nations qualifying match against South Africa in Johannesburg.
Mikel, who scored for his Chinese club at the weekend is yet to feature for the Nigeria side since Russia 2019 FIFA World Cup in June.
Onazi, other hand picked a knock in training ahead of the doubleheader against Libya in the qualifying series.

The Franco-German coach however called up stand –in Captain Ahmed Musa and 22 other players for the tie
The same group will prosecute the friendly encounter against the Cranes of Uganda at the Stephen Keshi Stadium, Asaba three days later.
Former U17 World Cup – winning forward Victor Osimhen returns after a long time out, with another U17 World Cup winning forward Samuel Chukwueze earning a first call.

Midfielder Mikel Agu, who played some part in the 2018 FIFA World Cup qualifiers, and home –based defender Adeleye Olamilekan Aniyikaye are also called; otherwise the Franco –German tactician has kept faith with the group that decimated Libya’s Mediterranean Knights over two legs earlier this month.
Midfielder Wilfred Ndidi, who is ineligible for the match after bagging yellow cards in the away matches against Seychelles and Libya, has been left out.

Francis Uzoho and Ikechukwu Ezenwa are among three goalkeepers; Olaoluwa Aina, William Ekong, Leone Balogun and Kenneth Omeruo are included among eight defenders; Oghenekaro Etebo and John Ogu are listed among three midfielders and; Ahmed Musa, Odion Ighalo, Samuel Kalu and Alex Iwobi are among nine forwards. Henry Onyekuru and Junior Lokosa are listed among five standby players.
Nigeria, top of the Group E of the series with nine points battle eight –pointer and second –placed South Africa at the FNB Stadium, Johannesburg on Saturday, 17th November in one of the Matchday 5 fixtures.

Victory in the top-of-the-table encounter will automatically send the Eagles to the finals in Cameroon, with the second ticket in Group E to be down to a fierce call between the Bafana and the Knights.
The Super Eagles will fly from Johannesburg to Asaba on 18th November for the friendly with the Cranes on 20th November.
All the invited players are expected to report direct in Asaba on Monday, 12th November.