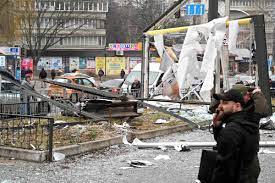 Ukraine’s president said on Thursday night that 137 people had been killed, and 316 wounded so far, after Russia launched a full scale invasion on his country by land, sea and air.

The current death toll includes both Ukrainian soldiers and civilians, according to Volodymyr Zelensky.

As night fell for the first time since Vladimir Putin initiated the all-out assault, heavy exchanges of fire were taking place the regions of Sumy and Kharkiv in the northeast, and Kherson and Odessa in the south, while Kiev said heavy Russian shelling was still underway in the eastern Donetsk region.

Moscow’s defence ministry said ground forces had moved in from annexed Crimea, and claimed to have “neutralised” Ukraine’s air defences and destroyed 11 airfields, with Russian troops also seizing an airbase just 25 miles from the capital’s centre. Ukraine’s airforce is thought to have comprised of roughly 200 aircraft.

Russian forces have also reportedly attempted to take control of Ukraine’s Serpent Island, which lies in the Black Sea less than 30 miles from Nato member Romania, while seizing control of the infamous Chernobyl nuclear power plant – a move the Ukrainian president claimed was “a declaration of war against the whole of Europe”.