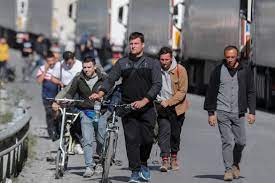 The tree-lined Rustaveli Avenue of Georgia’s capital, Tbilisi, is filled with young men lugging backpacks and suitcases, trying to orient themselves around this new city.

Occasionally accompanied by wives or girlfriends, they have fled their homes in Russia to escape the partial mobilisation ordered by President Vladimir Putin for more manpower on the battlefields of Ukraine.

Those who have previously served in the military, even as conscripts, and are now registered in the reserves, are the likeliest to receive a summons, but even older men with no experience have been called up.

“Four days ago, we didn’t think either of us would be here,” said Alexey, a 24-year-old would-be draftee, in a restaurant on the cobblestone streets of Tbilisi’s Old Town.

Georgian officials say more than 10,000 Russians are crossing the border each day and images widely shared on social media show lines of cars snaking towards Georgia and Mongolia.

The prices of direct flights out of Moscow have skyrocketed.

Alexey managed to buy a ticket to Vladikavkaz in the Russian region of North Ossetia, just north of the Georgian border.

On the morning of September 24, the queue at the Upper Lars Russia-Georgia border crossing was 2,000 cars long, so, he hired a scooter to cut across.