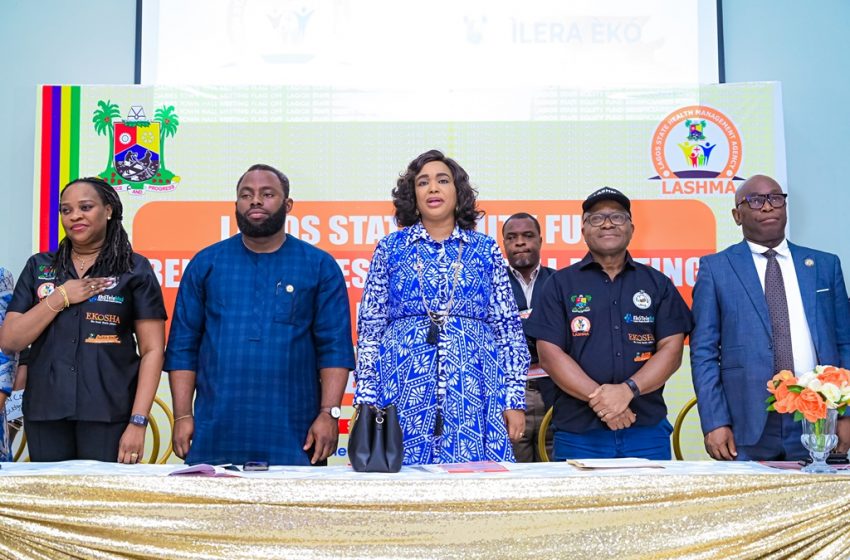 Lagos State Governor, Mr. Babajide Sanwo-Olu has so far approved N750 Million from the equity fund for the payment of health insurance premiums for 100,000 vulnerable and indigent residents of the state in line with the goal of ensuring universal health coverage for all.

The First Lady, Dr. Ibijoke Sanwo-Olu disclosed this on Wednesday while flagging off a Town Hall meeting with the beneficiaries of the health insurance equity fund organized by the Lagos State Health Management Agency (LASHMA) which is the agency saddled with the responsibility of ensuring that all residents have access to quality and affordable healthcare services through health insurance.

She said the equity fund which is funded through the 1 % (percent) set aside from the state’s Consolidated Revenue Fund (CRF) was to ensure that a sizeable proportion of the population who could not afford health insurance premiums due to a number of factors including economic status and physical disabilities were not left behind in accessing healthcare services as part of government’s social protection plan.

Represented by the wife of the state’s Commissioner for Information and Strategy, Mrs. Funmi Omotoso, the First Lady said the plan of the state government to promote the health of Lagosians had been anchored on health insurance, adding that huge investment has been expended in health insurance since the inception of the present administration.

“Since the inception of this administration, Mr. Governor has approved the payment of over N750,000,000 which has been used to pay the health insurance premiums of 100,000 residents of the State. In the short term, this has facilitated access to healthcare by a group of people who cannot afford to go to the hospital and, in the long term, will improve the health outcomes in the State,” the First Lady said.

She also said it was gratifying that all public servants in Lagos have been successfully onboarded on the Ilera Eko health scheme, while Lagos became the first State in Nigeria to commence health insurance regulations.

She said the town hall with the beneficiaries which will take place across the five administrative divisions of the state namely Ikeja, Badagry, Ikorodu, Lagos Island and Epe, was designed to get feedback and seek ways to improve access to health care by every resident of the State.

She, therefore, urged all beneficiaries to spread the good news of Ilera Eko equity fund to all and sundry, and most importantly take the full benefit of the laudable scheme.

In his welcome remarks, the Commissioner for Health, Professor Akin Abayomi commended the attention devoted to the health and wellbeing of residents by the Governor, saying it was on record that the present administration has deployed numerous health initiatives to improve the standard of living and quality of life of the people.

He commended LASHMA for the great efforts to improve access to healthcare services, just as he revealed that the agency was on the verge of rolling out an innovative health financing initiative to raise funds from philanthropists, organizations, and donors to crowdfund health insurance premiums and adoption of indigents and the vulnerable on the scheme.

Also speaking, Permanent Secretary, Lagos State Ministry of Information and Strategy, Mr. Olusina Thorpe who represented the Commissioner, Mr. Gbenga Omotoso, said sound health remains the foundation of everything in life without which life would be meaningless.

According to him, “health is everything. All over the world, there is no government that can adequately fund health services. This is why the health insurance program put in place by the Lagos State Government is the way to go and we must encourage more people to enroll,” Thorpe said.

Responding to questions at the event, LASHMA’s General Manager, Dr. Emmanuella Zamba said the agency was working in partnership with the Primary Healthcare Board to continuously increase the number of Primary Healthcare Centres (PHCs) offering insurance healthcare services gradually, while the government was firming up actions to ensure that all PHCs in the state are fully functional.

She said the Ilera Eko plan also has provisions for the care of senior citizens, as well as cancer treatment to some extent, just as she said that with an increased number of enrollees, LASHMA would be able to drop the cost and expand the services.