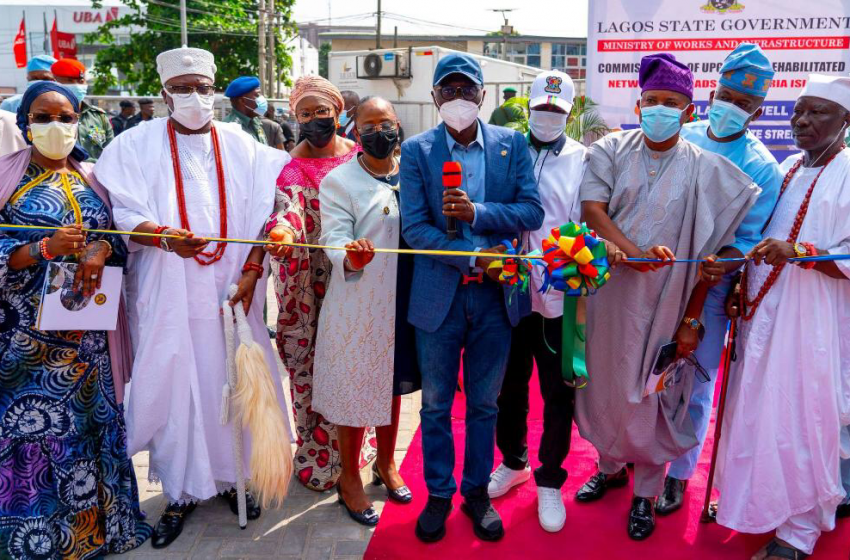 In its quest to develop a robust network of road infrastructure, the Lagos State Government on Monday commissioned the rehabilitated and upgraded Adeola Hopewell, Idowu Taylor and Afribank/Churchgate roads in Iru-Victoria Island Local Council Development Area.

Speaking at the commissioning ceremony, the Governor described the project as a fulfilment of some of the electoral promises he made at the inception of his administration, stressing that the event clearly demonstrates the audacious reforms in critical sections of the economy in line with the T.H.E.M.E.S Development Agenda.

Governor Sanwo-Olu said a major focus of his ‘Greater Lagos’ agenda is the prioritisation of urban renewal and the development of road infrastructure to enhance the collective wellbeing of Lagosians, noting that the State government operates an all-inclusive and people-centred approach that covers rural and urban areas.

Assuring that no part of the State will be left unattended, he averred that Victoria Island used to be one of the cleanest and most orderly neighbourhoods in Lagos State but the continuous growth of the area’s commercial activity has led to environmental and infrastructural degradation, among which are flooding and its attendant effects.

In his words: “The failure of many of the drainages and water channels on Victoria Island has consistently impeded the free flow of traffic, extending commuting time, causing damage to vehicles, low patronage for businesses, and generally lower quality of life for the people who work and live here”.

“As a responsive government, we are committed to the fulfilment of all our electoral promises, we had to do everything necessary to address and reverse the issue of incessant flooding and its consequences in the area”, Sanwo-Olu said.

The Governor stated further that in February 2020, the present administration awarded the contract for the reconstruction and upgrade of Adeola Hopewell, Idowu Taylor and Afribank/Churchgate Streets, saying “we took cognisance of the need to provide an effective drainage system and improved drainage network, as well as the need to provide good connectivity with other roads in the vicinity”.

He explained that the positive impact of the infrastructure upgrade, being formally commissioned to serve over 200,000 people daily, will no doubt be felt well beyond Victoria Island.

Sanwo-Olu said: “As always, l seek your continued support to ensure that these roads upgraded with our commonwealth are judiciously used and maintained. I urge you to refrain from any act that may compromise the integrity of these roads and undermine their durability, and do not hesitate to report to the authorities anyone found committing such acts”.

“It is indeed our collective responsibility to protect public infrastructure; doing this will free up government resources to do even more. I know that with the support of the community leaders and people of Iru-Victoria Island, the sustainability of these roads is guaranteed”, the Governor stated.

In her remarks, the Special Adviser to the Governor on Works and Infrastructure, Engr. Aramide Adeyoye said: “The event we are witnessing today serves as Phase I of the Urban Regeneration programme of the Governor Babajide Sanwo-Olu led administration for the Victoria Island axis. You would recall that it was about six months ago that we commissioned four roads in the Ikoyi area under the same programme with three other roads in the same area presently under construction”.

She also reiterated that the three roads form a ring right in the heart of the highly commercialised area of Victoria Island, discharging traffic through Sanusi Fafunwa Street into the famous Akin Adesola Street.

The Special Adviser averred that with the rehabilitation and upgrade of these network of three roads, the challenge of flooding and inadequate capacity will now become a thing of the past and will also translate into the improved free flow of traffic and to a reduction in travel time for business owners in the area and the motoring public at large.

She pointed out that the roads commissioned come with the full compliments of road furniture that are obtainable in other parts of the world, adding that the roads provide access to a lot of corporate offices and interconnect seamlessly with other roads in the area.

“Some of the other benefits derivable from the completion of the rehabilitation and upgrade are reduction in maintenance cost of vehicles as well as enhancing property value and socio-economic activities within the area”, Engr. Adeyoye added.

The Honourable Deputy Majority Leader, Lagos State House of Assembly and a representative of Eti-Osa I, Mr. Babatunde Adams, was full of praise for the State government for rehabilitating most of the bad roads in Eti-Osa and Lagos at large.