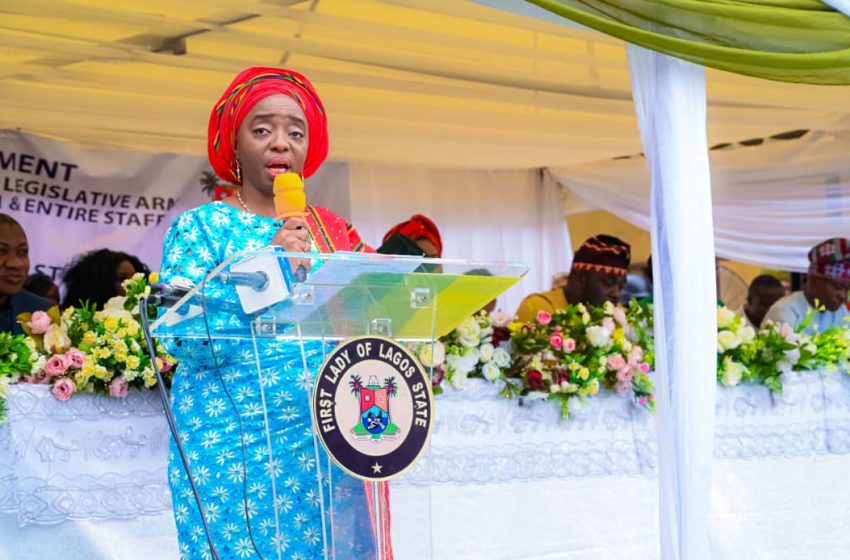 Wife of the Lagos State Governor, Dr. Ibijoke Sanwo-Olu on Thursday flagged off the 2022 Integrated Measles Vaccination Campaign in Lagos State.
The vaccination campaign will run from Friday, June 17 and end Monday, July 4, 2022 across the state.
Flagging off the campaign at the Kosofe Local Government Secretariat, Ogudu, she said measles is a highly contagious, vaccine-preventable disease caused by the measles virus and that it is a disease of public health importance that usually affects children younger than the age of 5 years.
Sanwo-Olu said affected children developed a high fever, cough, runny nose, redness of the eyes, and a rash that appeared all over the body. and that if not prevented or promptly treated, measles could lead to blindness or death.
“Nigeria currently has the highest global burden of measles outbreaks and there have been several outbreaks in some of our LGAs in Lagos State.
“The measles virus is spread through coughing and sneezing from close personal contact or direct contact with infected persons. Unvaccinated or partially vaccinated children can become infected in creches and schools which is why it is important to protect our children from the virus.
“The measles vaccine reduces mortality in children by over 80% which makes it a very crucial public health intervention, however, only 85% of children who receive the first dose of the measles vaccine may be protected, thereby bringing about the clear need to revaccinate and protect the remaining unprotected 15% of children,” she stated.
Sanwo-Olu added that the 2022 measles campaign would be integrated with other services to improve efficiency and effectiveness, especially at the primary health care level so that parents and caregivers could access multiple services at the same time.
The First Lady said the campaign would be conducted for eight days each in two streams to maximize resources and ensure that government reached all the eligible populations during these periods and that there would be 10 participating LGAs per stream.
“The first stream will commence on the 17th to 24th of June 2022 and the participating LGAs are Agege, Ajeromi, Alimosho, Amuwo-Odofin, Badagry, Ibeju, Kosofe, Lagos Mainland, Lagos Island, and Surulere.
“The second stream will start on the 27th of June and run till the 4th of July in the following remaining 10 LGAs – Apapa, Epe, Eti-Osa, Ifako-Ijaiye, Ikeja, Ikorodu, Mushin, Oshodi-Isolo, Ojo and Somolu.
“A total of 1,800 vaccination teams will be available per stream across the LGAs and LCDAs and the teams will be providing the services mentioned above (i.e measles vaccination with vitamin A supplements, routine immunization, and covid vaccination) from fixed and temporary fixed posts that includes public and selected private hospitals, schools, clinics in religious houses and houses of influential community leaders all in a bid to reach the eligible population and achieve a 100% coverage,” he explained.
Sanwo-Olu encouraged all local government stakeholders, especially the chairmen that all hands must be on deck to ensure a successful outcome in the State across the 57 Local Government Areas and Local Council Development Areas.
She sought the support of community leaders in facilitating community participation and mobilization of  children and eligible adults for the vaccination campaign.
The Commissioner for Health, Prof. Akin Abayomi, said this campaign would be integrated with other services to improve efficiency and effectiveness especially at the primary healthcare level.
Abayomi, represented by the Permanent Secretary, Ministry of Health, Dr Olusegun Ogboye, said that parents and caregivers could access multiple services at the same time.
The Commissioner noted that measles vaccine, vitamin A and polio vaccine would be given to the children free of charge.
“The measles vaccine is for nine months to 59 months; the vitamin A is for six months to five years; while the Oral Polio Vaccine (OPV) is for zero to five years.
“The teams will be providing the services mentioned above: measles vaccination, vitamins A supplement, routine immunisation and COVID-19 vaccination.
“They will be available at both public and private hospitals, schools, clinics, religious houses, houses of influential community leaders, all in a bid to reach the eligible population and achieve a 100 per cent coverage,’’ Abayomi said.
In his remarks, the World Health Organisation Team Lead, Lagos Office, Dr Ahmed Khedr, said the United Nations promoted the well-being of individuals and this campaign was to support Nigeria in her universal health coverage.
Khedr said he was optimistic that the campaign team would deliver a good job in vaccinating the targeted children.
Also speaking, the Chief of Health, United Nations International Children’s Emergency Fund (UNICEF), Dr Eduardo Celades, noted that the campaign was the first of its kind because measles, polio and COVID-19 vaccination including, vitamins A supplementation were integrated together.
Celades explained that the campaign was bringing efficiency and a new way of eliminating the virus in the country.
According to him, the campaign will bring impact, which will target four million children from zero to five years old.
He said 4.7 million children were expected to get vaccinated against polio and more than 1.7 million children were expected to get the COVID-19 vaccination.
The Chairman, Kosofe Local Government, Mr Moyosore Ogunlewe, implored all community leaders to take advantage of the campaign and inform their communities.