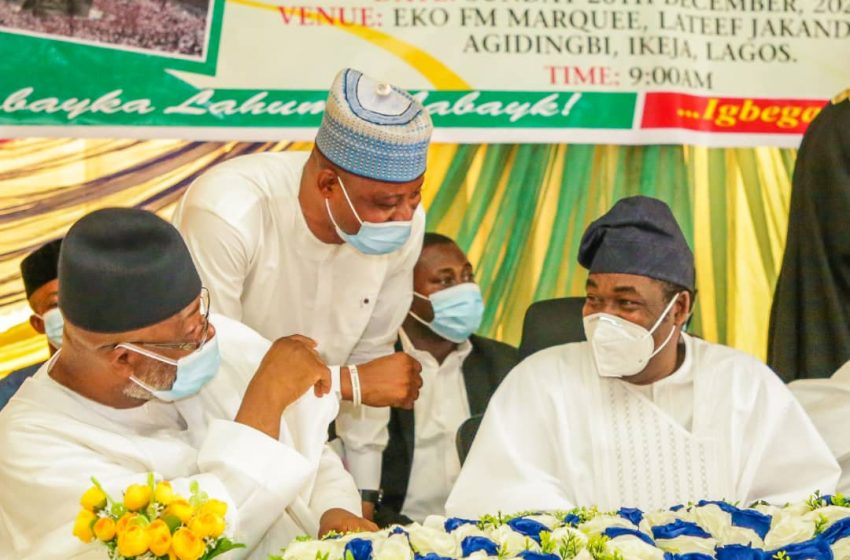 Speaking at the event, the Governor described the scheme as a welcome development that could not have come at a better time, particularly now that the global economic meltdown is affecting virtually everybody and countries of the world including Nigeria.

Sanwo-Olu, who was represented at the event by the Deputy Governor, Dr. Kadri Obafemi Hamzat, added that the launch of the scheme reflects the spirit of oneness amongst all stakeholders and a demonstration of their commitment to key into the initiative and ensure the successful implementation.

In his words, “It gladdens my heart to note that this official launch reflects the spirit of oneness amongst all the stakeholders which has made it possible for all of us to gather here today to witness this historic event. It is also a demonstration of the resolve of key stakeholders to embrace this initiative and ensure its successful implementation”.

While commending the management and staff of the National Hajj Commission of Nigeria for finding Lagos State worthy of hosting the flag-off of the project for the South-West Zone, the Governor assured the Commission of the State government’s support for all its laudable initiatives aimed at improving the narratives of Hajj operations in the country, including the Hajj Savings Scheme.

Speaking further, the Governor called on Islamic Clerics in the State to enjoin their followers to adhere strictly to the COVID-19 protocols as the disease is still very much around and active.

“The disease is still very much around and active, we must therefore ensure that we know our status and adhere strictly to the laid down protocols of physical distancing, regular handwashing with soap and running water, use of hand sanitisers, wearing of face masks and avoiding large gatherings among others”, he appealed.

Earlier in his remarks, the Lagos State Commissioner for Home Affairs, Prince Anofiu Olanrewaju Elegushi described the scheme as significant because it is the first time since Hajj operations began in Nigeria that a full-fledged contributory Hajj Savings Scheme will be introduced in the country to ameliorate the financial burden in the fulfilment of Hajj rites as enshrined in the Holy Qur’an.

He stated further that the initiative will have positive impact on Hajj administration in Nigeria and create an enabling environment for intending pilgrims to contribute gradually towards the actualisation of their dream of becoming Pilgrims in no distance future.

Elegushi, therefore, implored the people to tap into the great opportunity provided by the scheme by registering immediately with Ja’iz Bank PLC to start contributing.

On his part, the Chairman, National Hajj Commission of Nigeria, Alhaji Zikrullah Kunle Hassan, stated that the introduction of the Hajj Savings Scheme is one of the strategic moves designed to achieve the desire of making Hajj affordable for average Nigerian Muslims as enshrined in the establishment Act Section 7 Sub-Section 1, which empowers the Commission to establish, supervise and regulate a system of Hajj Saving Scheme to be operated by the Pilgrims Welfare Board of each State and FCT for interested pilgrims.

He added that the operationalization of the scheme is historic in the Commission’s efforts towards self-financing to wean it from depending on the scarce government resources, which can be utilised for provision of infrastructure and other social services in the country.

Hassan explained that the scheme has a developmental approach that seeks to liberalise payment, build value chains and overcome the infrastructure deficit and as well address the issue of poverty inequality in the country, adding that the initiative will avail intending pilgrims or depositors various options in which they can participate or enrol.

The Managing Director and Chief Executive Officer, Ja’iz Bank, Mr. Hassan Usman, disclosed that the launch of the scheme in Lagos is a further affirmation of the enormous belief the bank has in the Lagos Muslim Community to embrace the innovative idea and make the scheme a grand success.

He added that the bank is committed to the scheme and is ready to support it with state-of-the-art technology, infrastructure and self-investment management practices.

The Scheme is a tripartite arrangement between the National Hajj Commission of Nigeria (NAHCON), States’ Muslim Pilgrims Welfare Boards and Ja’iz Bank, designed to encourage intending pilgrims to save towards actualising their dreams of performing the Holy pilgrimage in Saudi Arabia as enshrined in the Holy Quran within a specified period of time.