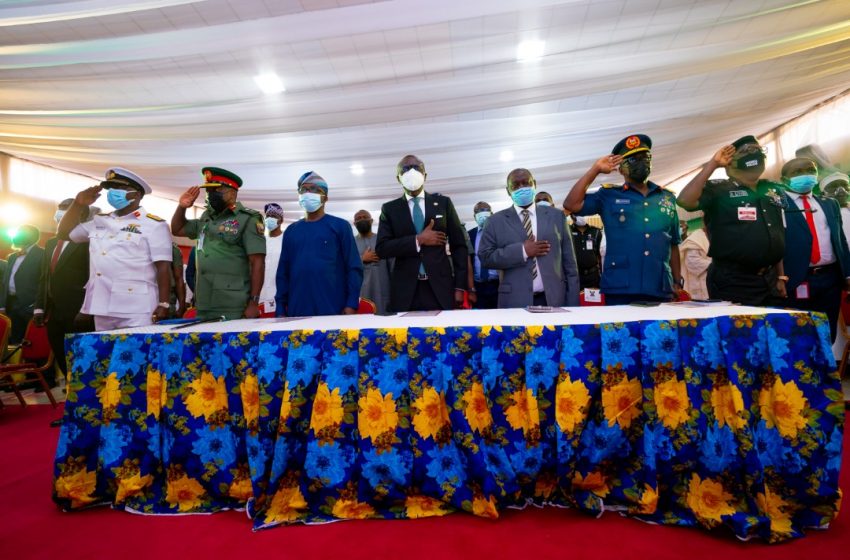 Lagosians have asked the State Government to take decisive actions on some security issues to rein in what they describe as a disturbing trend.

Among others, they demanded action against what many described as the menace of commercial motorcycles, otherwise known as Okada, kidnapping, armed robbery, cult clashes, and violent assaults.

It was all at a Stakeholders’ Meeting on Security held at the Adeyemi Bero Hall, Alausa, Ikeja where Governor Babajide Sanwo-Olu and leading lights in security circles listened to a group of panelists who highlighted the state’s security challenges.

Governor Sanwo-Olu listed his administration’s efforts in security and assured his audience that decisive action would be taken on commercial motorcycles, which speaker after speaker described as a means for criminals. Its operators, they said, are unruly, uncouth, rude and brutal. But those who patronise them and the motorcyclists will not be left in the cold.

The Government, Sanwo-Olu said, will be inaugurating the First and Last Mile buses next week, which will ply the routes the motorcycles are plying. Besides, those who have taken up Okada riding for lack of jobs were advised to grab the opportunities in agriculture, wealth creation, poverty alleviation and other government programmes.

Sanwo-Olu said the meeting was convened in response to the growing threat posed by some lawless activities to the safety and security of lives in the State.

The Governor said the string of lawlessness daily witnessed from the confrontation between commercial motorcyclists and law enforcement agencies required urgent action, stressing that the Government would be announcing reforms in transportation, which will further make changes to the parameters of motorcycle and tricycle operations.

He said: “We have noted with dismay the fact that Okada riders are disregarding and flouting the restrictions we imposed on their activities in certain areas of the metropolis. We have also observed with dismay, the ongoing violent confrontation by commercial motorcyclists against our law enforcement agencies.

“Based on all that we have seen and experienced in the past couple of weeks, as well as the increasing threat posed by the activities of commercial motorcycle operators to the safety and security of lives, we will be announcing further changes to the parameters of motorcycle and tricycle operations in the State in the coming days. No society can make progress amid such haughty display of lawlessness and criminality.”

Sanwo-Olu made it known that the Government would fully implement the State’s Urban and Regional Planning and Development Law of 2019 as amended, which will enable the Government take over and demolish abandoned buildings and construction sites turned into safe haven for hoodlums and miscreants.

He added that the State would strengthen its clean-up exercise of shanties and spots unapproved for settlement, but which had turned to hideouts for criminals.

The State Government, Sanwo-Olu said, would be recruiting more personnel into the Lagos State Neighbourhood Corps (LSNC) to boost intelligence gathering at the community level.

The Governor said the consultative meeting with the stakeholders was necessary to make the State’s security strategy effective and sustainable, noting that all hands must be on deck to work with the Government in collecting, sharing and evaluating credible intelligence that would strengthen security of lives and property in Lagos.

He said: “Lagos must continue to enjoy an atmosphere of peace, safety and all-encompassing security. We are determined to arrest the current security challenges being faced in the State, and we will take every step necessary to deliver our promises on a safe, secure and livable state. We will also continue to communicate regularly with key stakeholders, and all the residents for updates on the progress we are making.”

Appraising the security situation in Lagos, Commissioner of Police, Mr. Hakeem Odumosu, raised alarm over rising security breaches resulting from the menace of Okada operations in the State.

Between January and early this month, Odumosu disclosed, 320 commercial motorcycles were arrested in 218 cases of criminal incidents in which 78 suspects were detained and 480 ammunition recovered.

In the same period, the Lagos police boss said Okada accounted for 83 per cent of 385 cases of avoidable fatal vehicular accidents in Lagos.

He said: “The menace of Okada operators does not end with avoidable accidents. Crime reports from the field have shown that a greater percentage of crimes, ranging from armed robbery, cultism, kidnapping, murder, burglary and stealing, traffic robbery to carjacking and cash snatching from bank customers, are attributable to armed hoodlums who operate on Okada.

“The nuisance constituted by the Okada operators on Lagos roads has become a danger to law-abiding citizens. Sections of Lagos populace have come to regard commercial motorcycles as a necessary evil, it has become imperative for the Government to take more drastic measures against their notoriety.”

“The State Police Command strongly advises the State Government to immediately review the current guidelines guiding the operation of Okada as a means of commercial transportation in the State and take decisive legal and administrative steps and policies that will curb their traffic, criminal and other nefarious activities in the State.”

There was a panel of discussion chaired by an award-winning Television Show host, Babajide Kolade-Otitoju, in which residents aired their views on the current state of security in Lagos and across the country.

The discussants expressed concerns on the security implications of allowing operations of Okada and demanded a ‘Special Status’ for Lagos as an ethnic melting pot. They also urged the Government to create economic opportunities and vocational engagement for unemployed residents to further lessen crime rates.

Addressing the complaints about criminals hiding in uncompleted buildings and abandoned vehicles within communities, Vice Chairman of Lagos State Community Development Advisory Council, Mr. Rotimi Ayoku-Owolawi said the CDC was ready to support the Government and the police in identifying dark spots and lock-up markets from where criminals launch their nefarious activities.

Commissioner for Information Mr. Gbenga Omotoso described the stakeholders’ engagement as proactive, given a string of security breaches in the country.

He said gone were the days when citizens were at the mercy of pickpockets and amateur criminals; the contemporary crimes, he said, are being committed by armed robbers, bloodsucking bandits and daredevil gangsters.

“We don’t want our Lagos to become an epicentre of evil and criminality,” Omotoso said.

At the end of the stakeholders’ meeting, a 12-point resolution was reached and agreed upon by the participants in public interest.

The resolution reads in part: “Attacks on law enforcement officers and agencies should not be handled with kid gloves. Culprits must be arrested and the full weight of the law brought to bear on such persons.

“Government must take stringent measures to ban the use of Okada as means of transportation in the State; alternatives must be provided by the State Government in Agriculture, Wealth Creation, Women Affairs Empowerment programmes and others.