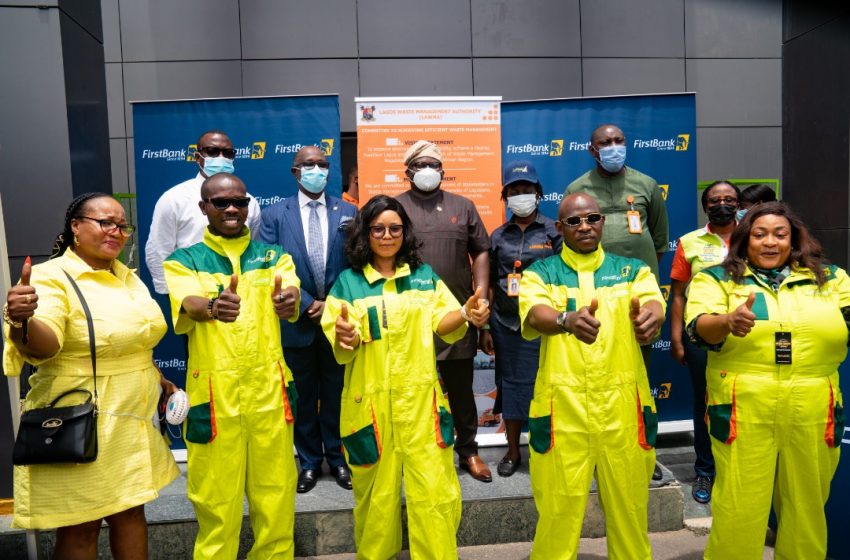 Governor Babajide Sanwo-Olu has made available thousands of sweepers’ uniform to the Lagos Waste Management Authority (LAWMA, which have in turn been branded by First Bank Plc.

Speaking at the unveiling event, Managing Director/CEO of LAWMA, Mr. Ibrahim Odumboni profusely thanked Mr. Governor for the kind gesture while commending the corporate social responsibility initiative of First Bank, adding that the gesture would open a new chapter of collaboration between the two organizations.

He stated that the Authority had never rested on its oars in ensuring sweepers got good welfare, as morale booster in their job of ensuring cleanliness, adding that LAWMA had earlier rebranded the sweepers with good welfare package alongside prompt payment of their salaries.

According to him, “We are so grateful to Mr. Governor for kindly providing thousands of uniforms for our sweepers which have now been branded by First Bank. We cannot thank him enough. We are also thankful to First Bank for this friendly gesture. Infact, I never believed that they would go to this extent. They were so persistent and this has paid off with this new chapter of collaboration. We sincerely applaud this initiative’’.

Odumboni however canvassed more support, in the area of financial solutions to sweepers, to help them establish businesses and other meaningful projects.

In his remarks, the CEO of First bank, Dr. Adesola Adeduntan, represented by Mr. Seyi Oyefeso, Group Executive Commercial Banking noted that the bank decided to lend its support to Lagos state government and LAWMA, to achieve a common good of environmental sustainability, in areas of their operations.

Unveiling the branded uniforms, the Chief Technical Officer of LAWMA, Dr. Olorunwa Tijani, copiously commended the bank, noting that the lavishly reflective nature of the outfits, would enhance the visibility of the sweepers at work, and prevent accidents involving them.

Commenting, the LAWMA boss, Mr. Ibrahim Odumboni noted that the deep concern of the agency for the welfare of its workers necessitated the program, stressing that his agency wanted excellent health for its personnel at all times.

In another development, LAWMA has organized free HIV/AIDS screening for its sweepers, in conjunction with the Lagos State Aids Control Agency (LSACA), in line with the United Nation’s directive, that 95 percent of citizens know their HIV status, so as to take healthy precautions in the pandemic period.

Also speaking, the Chief Executive Officer of LSACA, Dr. (Mrs.) Monsurat Adeleke, noted that it was necessary to ensure health and wellness for the sweepers, because they were frontline workers amid Covid-19 pandemic, and priority attention must be given to them.

She said: “LAWMA has a big workforce and they are an important stakeholder in the state. We key into the mandate of knowing sweeper’s HIV status. HIV is not a death sentence if you test positive. There are vaccines you can be given, to manage it and if you test negative, you will be advised on how to ensure being careful not to contract it. Our watchword is to help you develop your health status and manage yourselves by testing you.”

The LAWMA boss thanked Adeleke and her team, for prioritizing the authority in their operations.