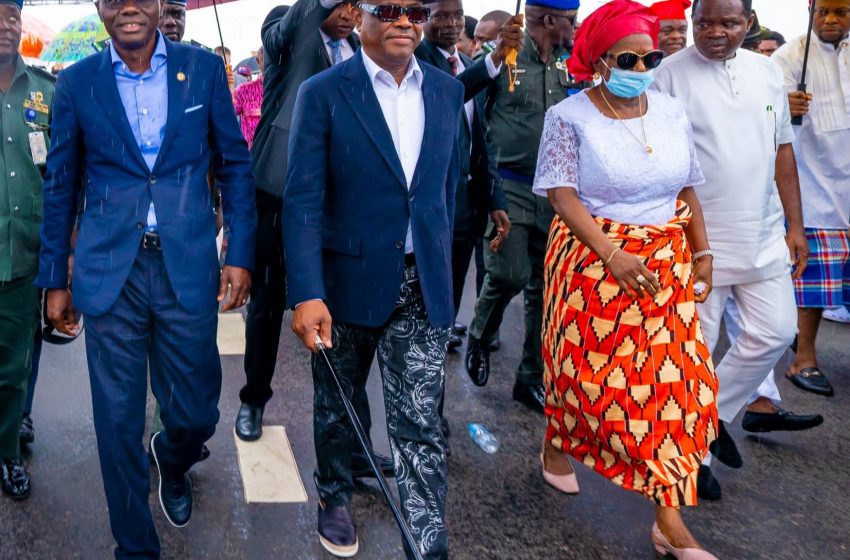 Lagos State Governor, Mr. Babajide Sanwo-Olu, on Monday charged politicians, political leaders and public office holders across political and ideological divides to come together for the good of the people.

He said there are lots of things political leaders and public office holders can learn from one another’s experience in different parts of the country if they embrace politics without bitterness.

Sanwo-Olu commended Wike for his strong commitment to the delivery of physical infrastructure in Rivers State, noting that the governor’s effort has been recognised by all and sundry and has earned him the appellation of “Mr. Projects” within and outside Rivers State.

He also congratulated the people of Rivers State on the birth of the major piece of infrastructure that will, no doubt, positively change their lives, but also ultimately serve as the crucial springboard into more social and economic prosperity.

“Governor Nyesom Wike and I belong to different political persuasions, but this invitation today sends a very strong message, that we, as politicians and political leaders, can come together across political and ideological divides, for the good of our people.

“Infrastructure projects do not discriminate; they belong to everyone, regardless of your politics. They make life easier for all, regardless of who you voted for in the past or plan to vote for in the future.

“There is also a strong message being made today about expanding our capacity to play politics without bitterness. This symbolic gesture by my friend and brother is one that should become standard practice across Nigeria. There is also a lot that we can learn from one another, and experience that we can translate from one part of the country to the other.

“Because Lagos and Rivers share a number of similar contexts, it is imperative that we put a lot more work into creating institutional mechanisms for comparing notes and learning from each other, with regards to solving the challenges of urban planning, transportation, climate change, security, revenue generation, business climate and others.

“Ultimately, we are all in governance to touch the lives of the people for good; to deliver to them the dividends of democracy. There is no doubt that Governor Wike has spent his last seven years focused on this; just as we have similarly been doing in Lagos,” Sanwo-Olu said.

While commending Governor Wike for his strong commitment to the delivery of physical infrastructure in Rivers State, Governor Sanwo-Olu said: “This Orochiri-Worukwo (Waterlines) Flyover is just one of several impactful projects that the Rivers State Government has delivered over the last seven years, under the watch of His Excellency. I am told that there are around a dozen major flyover projects in all, completed and ongoing, and I am also aware that there are still many other projects across various sectors, which will be duly commissioned within the life of this administration.

“The new Flyover being commissioned today, as you can all see, is a design and implementation masterpiece, at almost a kilometer long, and a total of eight (8) lanes, supported by a robust flood-control system and underground drainage. Governor Wike is very much a “Talk and Do” Governor.”

Speaking on the relationship between Rivers and Lagos states, Governor Sanwo-Olu said people are drawn to Lagos and to Port Harcourt as places where economic opportunities abound and where their dreams can be achieved.

He said: “Rivers and Lagos states share a lot in common. We are both densely populated economic centers, dealing with similar challenges of a rapidly growing population, urbanization, climate change, and increasing pressure on our physical infrastructure. We both have fairly extensive coastlines and coverage by water.

“Unlike Rivers, however, we are still hopeful that our own crude oil will reveal itself to us in large quantities very soon. People are drawn to Lagos and to Port Harcourt as places where economic opportunities abound and where their dreams can be achieved, and every day, large numbers of people flock to these cities from across the country.

“Our approaches to solving our challenges have also been similar, focusing on investing in projects that will ease bottlenecks and expand our capacity to absorb pressure, like this Flyover being commissioned today.  It will no doubt improve the commuting experience of the people of Port Harcourt, and by extension the quality of their lives. They will be able to spend less time stuck in traffic, which means more time is available for truly productive activities, and for leisure.”