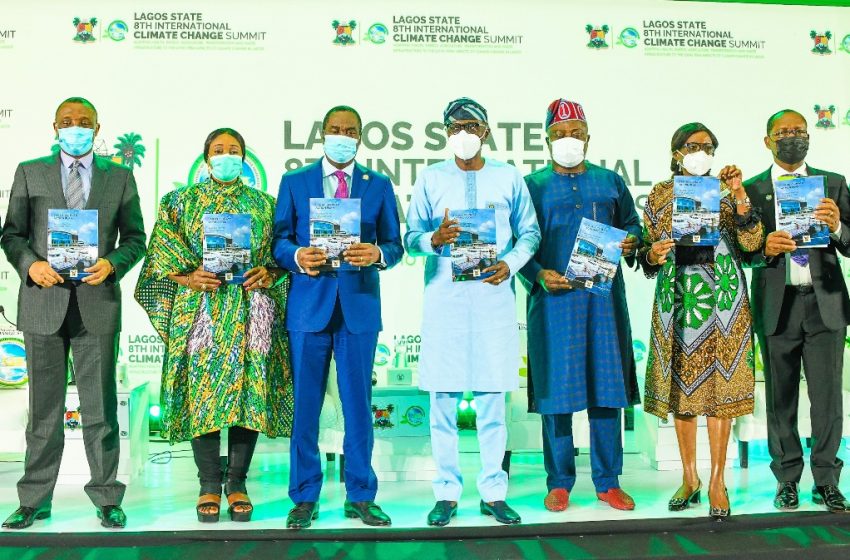 The Second Five-Year Plan 2020-2025 is an updated action document succeeding the 2015 Climate Change Policy and Action Plan adopted by Lagos after the landmark Paris Climate Change Conference, which encapsulated the State’s vision for achieving a zero-carbon Lagos.

Sanwo-Olu, on Tuesday, launched the new action plan at the 8th Lagos State International Climate Change Summit organised by the Ministry of the Environment and Water Resources at Lagos Continental Hotel, Victoria Island.

The theme of the two-day event is: “Adapting Health, Energy, Agriculture, Transportation and Waste Infrastructure to the Long Term Impacts of Climate Change in Lagos.”

With the new document, the State Government will be responding to prevailing issues threatening the realisation of zero-carbon ambition, which are energy use, waste management and transport. They account for 90 per cent of total greenhouse gas emission in Lagos. The summit also focuses on the relationship between climate change and delivery of critical infrastructure transportation, agriculture and healthcare sectors.

Sanwo-Olu said the increased impacts of natural disasters felt across the world in the past year showed that climate change was no longer a speculative danger, but a real, phenomenal threat to humanity and safety of the environment.

Given the State’s topography and proximity to the Atlantic Ocean, the Governor said Lagos is vulnerable to adverse events resulting from natural causes. This, he said, prompted his administration to update the action plan to facilitate proactive response and clear strategy in mitigating the effects on global warming on the environment and the State economy.

He said: “This summit is an opportunity for us to present new Lagos State Climate Action Plan to the world. Painstaking effort has gone into it, and we are proud that we have been able to come up with a document that has robust plan for the environment. We have successfully updated the climate change action document adopted by Lagos in 2015 to reflect the targets and goals of the Paris Climate Change Agreement. The final product is the ‘Lagos Climate Action Plan: Second Five-year Plan 2020- 2025.

“The updated Climate Action Plan reveals three main areas of threat to our zero-carbon ambition in Lagos, which are energy, waste and transport. They account for 90 per cent of our total greenhouse gas emission. We are now more adept at incorporating climate-friendly thinking into everything we do as a Government. Our goal is to entrench the action plan across the entire State, and get Lagosians imbibe the culture of climate-awareness in their homes, workplaces and lifestyles.”

Sanwo-Olu said most of the projects being undertaken by his administration were to address climate change and fast-track attainment of the zero-carbon goal in transportation, healthcare, energy, agriculture and waste management.

He said his Government’s public transport reform sought to reduce number of personal vehicles on the roads, by providing alternative transportation model in form of low-emission buses and rail connections.

The State Government, Sanwo-Olu pointed out, has adopted composting, recycling and waste-to-energy as part of the strategies to improve the quality of waste management in Lagos.

In the energy sector, Sanwo-Olu said the Government would be rolling out opportunities in usage of off-grid solar systems to connect public schools, hospitals, government offices and public facilities. He added that the State was looking into the exploring option of incentives to homes to move from fossil fuel generators to solar systems.

He said: “Lagos has been outstanding in the annual environmental reporting on the global disclosure system by the CDP, an international non-profit that measures the commitments of investors, companies, cities, states and regions to reducing their greenhouse gas emissions. For three consecutive years, Lagos has emerged with a B score, which is well above the African and Global average score. This annual reporting has helped us greatly in understanding where we are and what still needs to be done.”

The Governor thanked his predecessors for laying the foundation of developing climate action plan, paving the way for consolidation by his administration.

Commissioner for the Environment and Water Resources, Mr. Tunji Bello, said the summit, since inception in 2009, had become a melting pot for researchers, investors, academicians and stakeholders in the environment and economic sectors to take unified decisions.

Bello praised Sanwo-Olu for bringing back the climate summit, five years after the event was held.

He said: “Around the world, Governments and businesses are planning for climate instability. From flood defences to foreign aid, climate change is now part of policy and public discussions. The theme of this summit cannot be more apt than now because we have reached a point where Lagos needs to be intentional on projects and programmes that will be climate change compliant.”

The envoy stressed that the call for action must be reinforced, given the significant impacts, which degradation of agricultural land has had on global food security. He reiterated the commitment of Switzerland to international conventions and protocols on climate change in its bilateral dealings with Lagos.

The updated action plan was attended by the Deputy Governor, Dr. Obafemi Hamzat, Speaker of House of Assembly, Rt. Hon. Mudashiru Obasa and members of the State Executive Council.