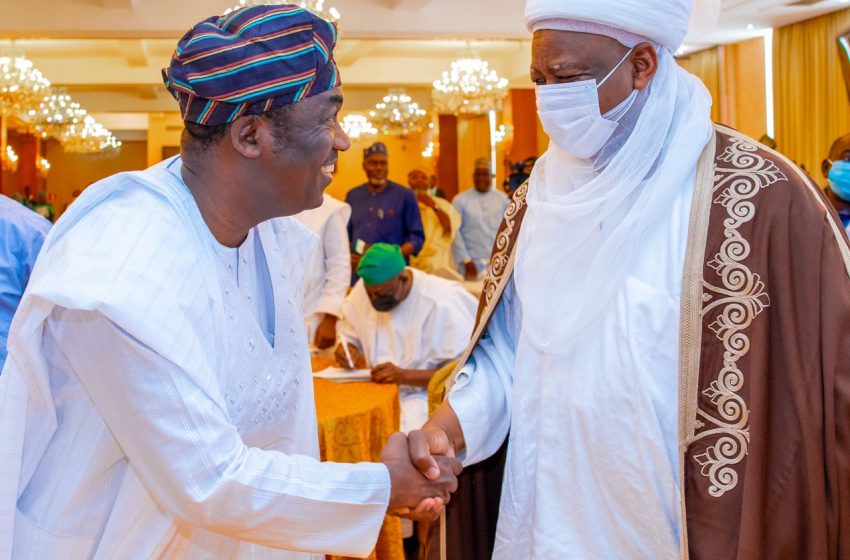 Lagos State Governor, Mr. Babajide Olusola Sanwo-Olu has assured that his administration will continue to provide and sustain a conducive environment for religious tolerance and harmony which Lagos is well known for.

The Governor disclosed this at the Oriental Hotels, Victoria Island, Lagos, venue of the Launch of a N10 Billion Endowment Fund by the Muslim Ummah of South West Nigeria (MUSWEN), noting that meaningful development can only take place in a peaceful environment.

Sanwo-Olu, who was represented at the event by the Deputy Governor, Dr. Kadri Obafemi Hamzat, commended the efforts of religious leaders who have contributed to the peaceful coexistence within the state in ensuring that Lagosians continue to live in peace despite religious differences.

He appreciated the cooperation of the different religious organisations, stating that his administration has always enjoyed their timely intervention in proffering apt solutions to issues.

He, however, urged the Ummah to continue to pray for the Government to succeed in the task of providing leadership under challenging circumstances.

Speaking further, the Governor noted that the purpose of the launch is to build an International Resource Centre which would be of immense benefit to all Muslims and the members of the community.

Sanwo-Olu averred that the project upon its completion would be a unifying centre that will encourage a healthy sharing of ideas and the development of mutual respect for the community at large.

He said: “The project will create access to resources such as finance and education which is very relevant given the intolerance that has been observed within the country in recent times”.

The Governor also appreciated the leadership of the MUSWEN for their foresight and generosity as well as for allowing the teachings of peace and brotherliness to dictate their thoughts and actions.

While speaking on the forthcoming 2023 general election, Governor Sanwo-Olu charged Nigerians to ensure that they enlighten, educate and encourage members of their families, friends and others on eschewing electoral violence, negative tendencies and pursuing peace at all times.

In his address, the Chief Host, Sultan of Sokoto, His Eminence, Alhaji, Dr. Muhammad Sa’ad Abubakar III admonished Muslims to continue advocating for a united Islam and not allow any intrusion, particularly during the election period.

“Muslims have no business with poverty if we are helpful to one another, there is no need for Muslims to be poor, if we follow the standard of Islam, help one another, pay zakat and follow the directives of Allah”, the Sultan said.

He noted that the International Resource Centre project is for the entire Ummah and not just the Ummahs in the Southwest because a lot of people will benefit from it, as it will elevate the standard of living of Muslims and non-Muslims.

Earlier in his opening remarks, the Chairman, Muslim Ummah of Southwest Nigeria (MUSWEN), Alhaji Dr. Sulaymaniyah Adegunwa stated that the Endorsement Fund will help strengthen Muslims of the Southwest and bequeath an enduring legacy to the future generation which will enable them to compete favourably with their peers anywhere in the world.

He added that the fund will enable MUSWEN to implement its purposeful research, identified programmes and projects.

Similarly, in his sermon, the National Missioner, Ansar-Ud-Deen Society of Nigeria, Imam AbdurRahman Ahmad admonished everyone to trade with Allah and invest in projects that can never crash or drop but remains stable.

He said: “Individuals who want their accounts to be perpetually credited even in the grave should trade with Allah”.