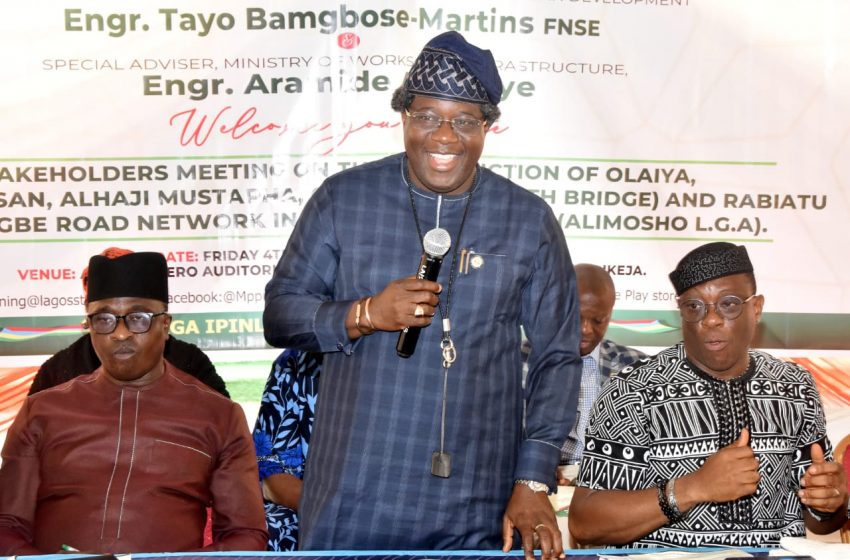 …As Lasg Meets Stakeholders On Execution of Project

The Lagos State Government has engaged stakeholders in Igando-Ikotun Local Council Development Area (LCDA) on the smooth execution of a network of five major roads in Abaranje and its environs.

The Commissioner for Physical Planning and Urban Development, Engr. Tayo Bamgbose-Martins, while addressing stakeholders at the meeting held at the Adeyemi-Bero Auditorium on Friday, said that all hands must be on deck for the successful execution of Olaiya, Ajibola Hassan, Alhaji Mustapha, Olu Adeyanju and Rabiatu Ogedengbe Road Network in Igando-Ikotun LCDA.

The Commissioner, who spoke through the Permanent Secretary, Ministry of Physical Planning and Urban Development, Engr. Oluwole Sotire, noted that the construction of several networks of roads within Alimosho Local Government Area would ease connectivity among communities in the axis and enhance transportation across the State.

“The magnitude of this project and others being executed by the Administration of Mr. Babajide Sanwo-Olu in Alimosho Local Government Area underscore the strategic importance of the area as a population hub with high demand for social amenities”, he said.

Speaking on the process of delivering the right of way to pave way for the smooth execution of the project, the Commissioner said: “It is important to note that officers from the Ministry of Physical Planning and Urban Development shall visit your neighbourhoods to carry out the required assessments and serve the necessary notices.

“After which their counterparts from the Lands Bureau would conduct another assessment for the purpose of paying compensation. As you may be aware, our compassionate Governor, Mr. Babajide Sanwo-Olu has mandated that we make provision of compensation to all deserving owners of structures affected by road development in the State”, he added.

Sotire also enjoined all to comply with Physical Planning Laws by building appropriately and encouraging others to toe the same line as it was rewarding to obtain the necessary approvals and secure LASBCA supervision in erecting buildings, while acting contrary to the law could produce unbearable negative consequences such as flooding, haphazard developments and building collapse among others.

Special Adviser, Works and Infrastructure, Engr. Aramide Adeyoye, who was represented by the Director of Road Construction, Engr. Tokunbo Oyenuga, said that residents would benefit immensely from the road upon its completion and urged them to ensure ownership and assist in monitoring the project throughout the stages of execution.

The Special Adviser to the Governor on e-GIS and Planning Matters, Dr. Olajide Babatunde urged the people to support the project, maintain vigilance in their environment and promote the whistle-blowing policy of the Government by reporting any untoward development around them.

A member of the State House of Assembly, representing Alimosho Constituency II, Hon. Kehinde Joseph, who expressed his appreciation to the State Government for carrying out many infrastructure projects in the area, enjoined his people to cooperate with the government and contractors to avoid unnecessary delays.

Others who spoke at the meeting include the Chairman, Igando-Ikotun Local Council Development Area, Comrade Lasisi Ayinde Akinsanya, represented by the Council Engineer, Engr. Isikalu Abiodun.