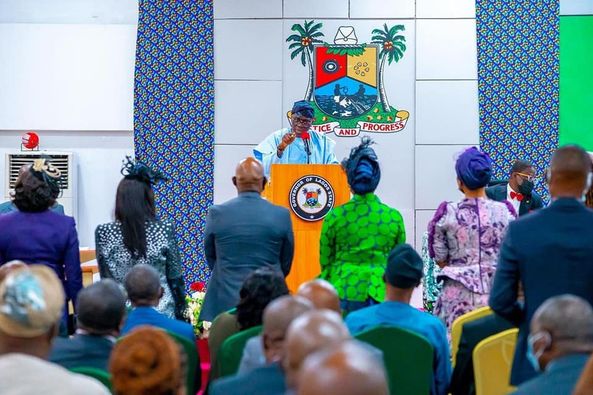 Lagos State Governor, Mr. Babajide Sanwo-Olu, has urged the newly appointed Permanent Secretaries to reciprocate the trust reposed in them by giving their best in providing quality service delivery in the discharge of their duties and responsibilities to Lagosians.

Speaking at the swearing-in ceremony of 10 Permanent Secretaries at the Lagos House Ikeja on Wednesday, Governor Sanwo-Olu said his administration remains committed to its THEMES agenda, which is the sign post of what is driving the government toward achieving its “Greater Lagos” agenda.

The appointment of the new Permanent Secretaries, Sanwo-Olu said, is a well-deserved elevation for the ten newly sworn in, noting that it was strictly based on merit and track records of performance in their previous duty posts.

Governor Sanwo-Olu also implored the new Permanent Secretaries to give everyone a positive experience as they continue to contribute their quota to service for the benefit of Lagosians.

He said they should render quality service to the people of Lagos State by making them know that public service of Lagos State is the best in the country and one that people are truly proud of.

While presenting the new Permanent Secretaries, the Head of Service, Mr. Hakeem Muri-Okunola said two of them, who were appointed Auditors-General for the State and Auditor-General Local Governments would be operating in acting capacity pending their confirmation by the State House of Assembly.

He urged them to hit the ground running and justify the Governor’s confidence in them. He added that the new Permanent Secretaries should add value to the quality of Policy Development and implementation in the Lagos State Civil Service.

Speaking on behalf of the appointees, in their votes of assurance, Mr. Sunday Jokotola who is the Permanent Secretary and Tutor General (Education District Four), thanked the Governor for the confidence reposed in them while promising to key into the THEMES agenda and perform their duties according to the law guiding their appointments.

He also promised that the appointees would be loyal and they will not disappoint Governor Sanwo-Olu and the Lagos State Government.

Others are; Mrs. Bolarinwa Kikelomo Afusat (Local Government Establishment, Training and Pensions) and Engr. Daramola Olufemi Olubunmi (Public Works Corporation) while Mr. Sikiru Salami, Auditor-General and Mr. Obafemi Ogunlana, Auditor-General for Local Government were both sworn-in in acting capacity until their confirmation by the State House of Assembly.