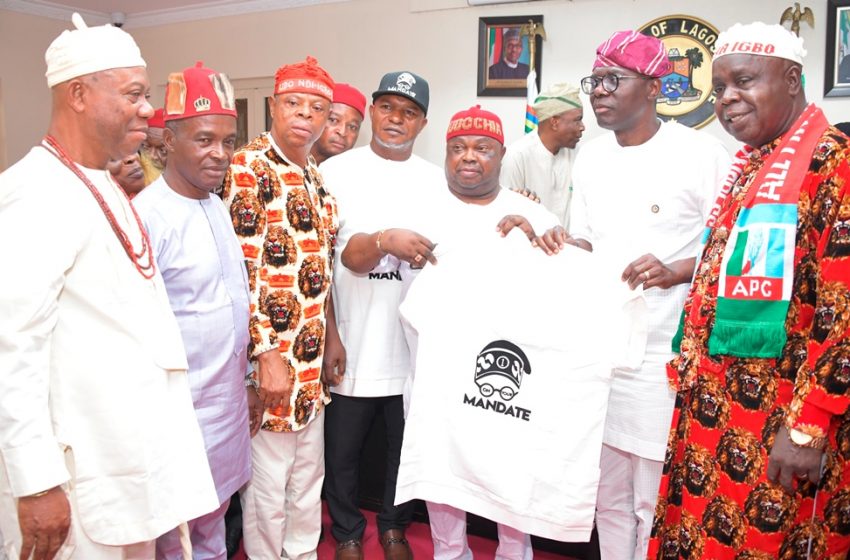 Lagos State Governor, Mr. Babajide Sanwo-Olu has urged residents of the State to continuously ensure that Lagos remains politically stable for continuous peace, which the state currently enjoys as the most peaceful state in Nigeria.

Governor Sanwo-Olu made the appeal on Sunday during his meeting with leaders of the Lagos State chapter of Ohanaeze Ndigbo led by its President, Chief Solomon Ogbonna, and Ohanaeze Political Forum led by its Chairman, Chief Chris Ekwilo, at the Lagos House, Marina.

He said the 2023 general elections for Lagos residents, especially the Igbo people should be about who has their best interest of the nation at heart, a person, who over the years has created opportunities without consideration for tribal interests and who has given a genuine platform for people to thrive, live and work well.

“There is no part of this State that one form of development is not happening. We will continue to push development in every nook and cranny of the state. This is the most peaceful state in the country. We spent so much on security to keep all of us saved on a daily basis. So, if people now come and want to divide us, we shouldn’t let that happen.

“We all have a responsibility to continue to ensure that Lagos continues to remain politically stable for all of us so that we can continue to enjoy the peace that we are all experiencing. All the things we are doing are natural for us to do because God has created us to make life better for our fellow human beings.

“Don’t let us begin to divide what has held us. Let us be careful and let our people know that what is holding us together is bigger than wanting to divide us. For me, it is not just about coming back; it is just because we want the development to continue in Lagos. We will do our best. We will convince and carry everybody along and make sure we give everybody a space. Don’t change something that is good and working,” he advised.

Governor Sanwo-Olu also commended the leadership of Ohanaeze Ndigbo in Lagos State, saying Ogbonna is passionate about his kinsmen and the welfare of the Ndigbo in the State.

Speaking at the event, Ogbonna commended Governor Sanwo-Olu for his support for the Ndigbo in Lagos State and assured the governor that Igbo will support his second term because he has fulfilled all the campaign promises he made in 2019 to the Igbo in Lagos State.

He said: “I want to commend Governor Sanwo-Olu for his support for Igbo people in Lagos State. He has fulfilled all the campaign promises he made in 2019 to Igbo in Lagos. So, we must support him and APC. If we have a governor of APC in Lagos and the same party at the federal level, it will be in the interest of the Igbo people.

Also speaking, the Chairman of the Ohanaeze Political Forum, Chris Ekwilo, who described Governor Sanwo-Olu as ‘best among equals’ said Igbo people will work for the victory of Asiwaju Tinubu and Sanwo-Olu in next year’s elections, noting that anything outside APC is wasted votes.

“We are doing everything possible to convince our people in Lagos that anything outside APC is a waste of votes. And because of the critical elections, we are facing, we have collapsed all the political groups of Ndigbo in Lagos APC into Ohanaeze Political Forum. We are going to join forces with the Ohanaeze chairman to reach out to our people in Lagos. Sanwo-Olu’s second term is a done deal,” he said.

Ekwilo also appreciated Governor Sanwo-Olu’s support for Igbo people in Lagos State through the Ohanaeze Ndigbo, especially the assistance he rendered to them during the COVID-19 pandemic by providing a lot of relief materials to cushion the effect of the pandemic on the people.