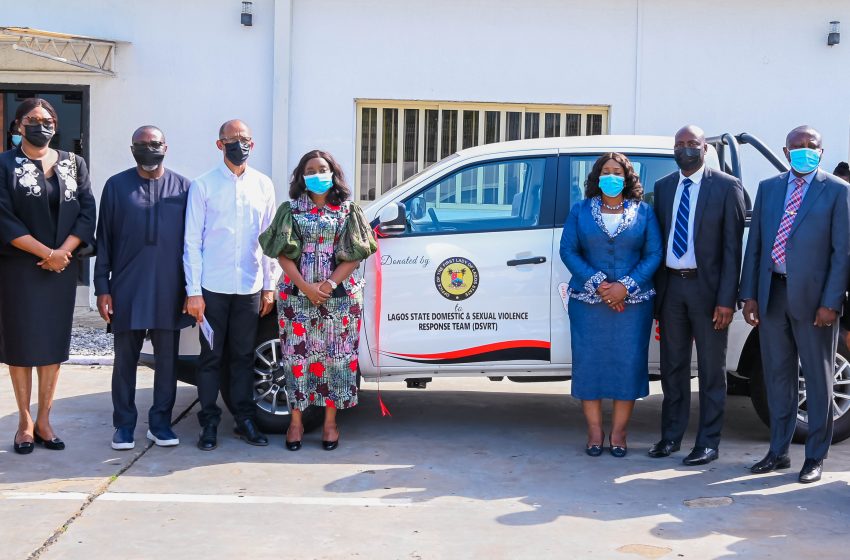 Wife of Lagos State Governor, Dr. Ibijoke Sanwo-Olu on Tuesday presented three utility vehicles to critical agencies of government as part of efforts to ramp up their capacities to adequately fight the menace of Sexual and Gender-Based Violence (SGBV) in the state.

The affected agencies are the Domestic and Sexual Violence Response Team (DSVRT) of the Lagos State Ministry of Justice, the Child Protection Unit of the Ministry of Youth and Social Development, and the Gender Unit of the State Criminal Investigation and Intelligence Department (SCIID), Panti, Lagos.

Speaking at the event held at Lagos House, Alausa, Ikeja, the First Lady, who is coordinating the state’s multi-sectoral stakeholders’ committee against SGBV, said the donation commemorates the reward of several months of brainstorming and collaborative action among various agencies.

According to her, “In the course of our numerous meetings, we realized that some critical Stakeholders amongst us require additional utility vehicles to scale up awareness and as well galvanize action to combat the menace of violence against our women and children in the state.

“We reached out to well-meaning individuals, corporate organizations and government establishments for support and it was at this point that the Lagos State Lotteries Board graciously honored our request and supported us with these three utility vehicles,” she said.

While assuring that other agencies would equally be supported, the First Lady urged the beneficiaries to put the vehicles to good use to frontally combat all forms of SGBV in their various capacities, especially rape, defilement, among others.

She also appealed to well-meaning Nigerians, Civil Society groups, Corporate Organizations, and government at all levels to support the cause in order to significantly minimize the menace of Sexual and Gender-Based Violence in Lagos State in particular and Nigeria as a whole.

Responding, Permanent Secretary, Ministry of Justice, Ms. Titilayo Shitta-Bay commended the First Lady for the gesture, saying that the vehicles would greatly give the needed impetus to the fight against SGBV, especially in reaching all nooks and crannies of the state.

On his part, Permanent Secretary, Ministry of Youth and Social Development, Dr Aina Olugbemiga Ayoola, said the donation would go a long way to investigate cases of child abuse and promptly rescue victims to a protective custody, pending the outcome of investigation to prevent stigmatization.

For the Deputy Commissioner of Police in Charge of State CID, Panti, Adegoke Fayoade, the First Lady deserved to be deeply commended for her passion and commitment to the fight against SGBV, adding that the vehicle would be judiciously utilized to improve service delivery and ensure justice is not only done but transparently served.

Also speaking, Chief Executive Officer of Lagos State Gaming and Lotteries Authority, Mr Bashir Are said the donation of the vehicles was in furtherance of the vision of the agency to support good causes to make the state a safe and comfortable place for all residents.

“Part of the reason why we are established is to take care of good causes in the society and domestic and gender-based violence is something that we should not take lightly. This is why we have decided to support this cause so that there will be logistics to manage, to trace and to find a resolution to these vices in our society,” he said.