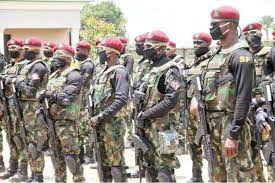 AS the directive given by Zamfara State government to citizens of the state to acquire arms to defend themselves against bandits continued to generate reactions, the House of Representatives, yesterday, sought an urgent intervention of the Federal Government to urgently deploy  troops to quell the attacks in the state.

The lawmakers took the position on a day Governor Hope Uzodimma of Imo State said he would not ask people of the state to take up arms and defend themselves, adding that the security situation in his state has not degenerated to the level of asking the citizens to bear arms to defend themselves.

This came as Governor Bello Matawalle of Zamfara State has said the state government relied on an extant legislation to direct residents to acquire weapons to defend themselves.

Considering a motion under matters of urgent public importance presented by Suleiman Abubakar, representing Gummi/Bukkuyum federal constituency of the state at plenary, the House expressed worry over incessant banditry attacks on the people of Zamfara State.

In his motion, Abubakar said the situation had gone beyond the level of the local security and, therefore, required the intervention of the Federal Government.

According to him, the bandits impose levies on members of the communities and also ask for ransom from those they kidnapped.

Adopting the motion, the House called on the Ministry of Humanitarian Affairs and Disaster Management and Social Development and National Emergency Management Agency, NEMA, to send relief materials to the affected communities.

Reacting to Governor Mattawale’s order in Zamfara State, Governor Uzodimma said he would not take a similar step, despite the security situation in the state, which has resulted in several deaths.

According to him, the security situation in his state has not degenerated to the level of asking the citizens to bear arms to defend themselves.

The governor also said the security situation in the state was under control, as citizens no longer obey the Monday sit-at-home order declared by the Indigenous People of Biafra, IPOB, in solidarity with Mazi Nnamdi Kanu who is on incarceration at the Department of State Service, DSS, facility in Abuja.

Speaking to State House correspondents after meeting with President Muhammadu Buhari at the Presidential Villa, Abuja, Uzodimma said he got the approval of the President to host the Army Day celebration in the state, stressing that the measure would further improve the security of the state.

On the security situation in Imo, the governor said security agencies in Imo were on top of the situation.

On his meeting with the President, Uzodimma said:  “Well, basically, I came to see Mr. President and to thank him for his gracious approval that Army Day celebration be held in Owerri, South East of the country.

On what the leaders of the South-East were doing over the negative effect of the sit-at-home order on businesses in the region as well as their alleged siddon look approach, the governor said there was no siddon-look in the South-East

He said:  “Governors in the South-East are all working together to ensure that security is guaranteed for people to go about their businesses.

‘’The sit-at home order is not operational in Imo State, it is not working in Owerri and sometimes, some parts of the South-East where it’s still in operation, the governors are also working in synergy to ensure  it becomes a thing of the past.”

On how concerned he was over the alleged deliberate attacks on Catholic priests by gunmen, the governor said:  “Regrettably, of recent, some Catholic priests became victims to the banditry saga in Nigeria. I’m not aware that is deliberate because no report has said that.

“But I think it is an unfortunate incident which is condemnable here and everywhere. And it’s not as if other people being killed are not important but we as Catholics, condemn that. And we detest any form of violence or taking of lives.”