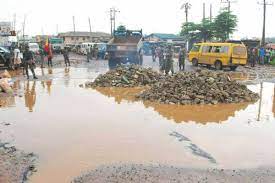 Senator, representing Lagos East Senatorial District in the National Assembly, Adetokunbo Abiru, on Wednesday, moved a motion for the urgent rehabilitation of the Ikorodu/Shagamu and Ikorodu-Itoikin-Epe- Ijebu-Ode roads.

In the motion titled, “Motion On The Urgent Need For The Rehabilitation Of The Ikorodu-Shagamu And Ikorodu-Itoikin- Epe Roads To Further Bridge The Infrastructure Gap And Enhance Economic Growth In Nigeria”, Abiru urged that the critical roads connecting the Ikorodu and other areas under the Lagos East Senatorial District to other parts of the country should be rehabilitated.

Abiru said, “Mindful that the Ikorodu–Shagamu road which starts from Ikorodu roundabout terminating in Isale-Oko, Sagamu, Ogun state and the Ikorodu-Itoikin-Epe road starts from Sabo, Ikorodu and terminates in Ijebu-Ode Ogun State are Federal roads;

“Further mindful that the Ikorodu–Shagamu road is an old alignment, and is one of the busiest roads in the south – west zone which was constructed in the 1960’s before the construction of Lagos– Ibadan expressway and was a major route carrying traffic from Lagos towards the Northern part of the country; until the commissioning of Lagos – Ibadan expressway in 1978;

“Aware that the Ikorodu-Itoikin-Epe Road also which had previously been constructed by Messrs Taylor Woodrow Nig. Ltd. was completed and commissioned by the then Head of State, General Yakubu Gowon in 1975.”