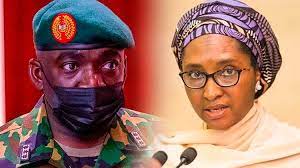 The committee issued the summons after the Minister was absent at a meeting called by the committee.

The Permanent Secretary of the ministry of Finance Aliyu Shinkafi represented the Minister but the committee was dissatisfied and insisted that the minister must appear before them.

In 2021, N100 billion has been appropriated and N19.4 billion released for the first quarter.

Just yesterday, he said, the ministry released N19.95 billion for the second quarter.

However, Senator Ali Ndume, Committee Chairman, presented a letter from the Chief of Defence staff where he stated that military authorities complained of a shortfall in releases from the Finance ministry.