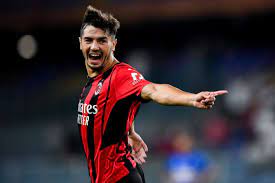 AC Milan opened their Serie A campaign on Monday with a 1-0 win at Sampdoria as coach Stefano Pioli fielded a host of new signings including Olivier Giroud.

Giroud, who turns 35 next month, is expected to make a sizeable impact for the Rossoneri alongside the club’s other ageing star Zlatan Ibrahimovic.

As the towering Swede recovers from knee surgery, Piolo will hope France’s second-highest scorer of all time can make as big an impact as he did at Chelsea, helping the Blues to the Champions League title last season.

With Milan back in the Champions League for the first time since 2013/14, a reliable presence in front of goal could be just what Pioli’s team need.

There was a new presence too between the goalposts, with Mike Maignan, recruited from French champions Lille to try to fill the outsize boots of Italy’s Euro 2020 winner Gianluigi Donnarumma, now with Paris Saint-Germain.

Looking assured in his new surroundings it was Maignan’s long pass that set up the only goal of the game, Davide Calabria then providing the assist with Sampdoria keeper Emil Audero unable to cope with Brahim Diaz’s low shot.

The Spanish midfielder joined on loan from Real Madrid last season and that has been extended for two more years.

With Sampdoria marking Giroud out of the game, the French forward was given little chance to open his Milan account.

Towards the end Piolo blooded another of his summer intake, Alessandro Florenzi, who completed his season-long loan move from Roma at the weekend.

Earlier, former Paris Saint-Germain midfielder Thiago Motta had hopes of opening his second stint as a Serie A manager with victory, when Spezia led Cagliari 2-0 with an hour played.

The ex-Italy international, a successor to Vincenzo Italiano, was back in the dugout for the first time in 18 months after his first managerial role at Genoa ended after 10 games in the sack.

Emmanuel Gyasi put his new club into an early lead, with Simone Bastoni doubling up on 58 minutes.

But home side Cagliari were back in it when Joao Pedro scored in the 62nd minute, and levelled from the penalty spot four minutes later.