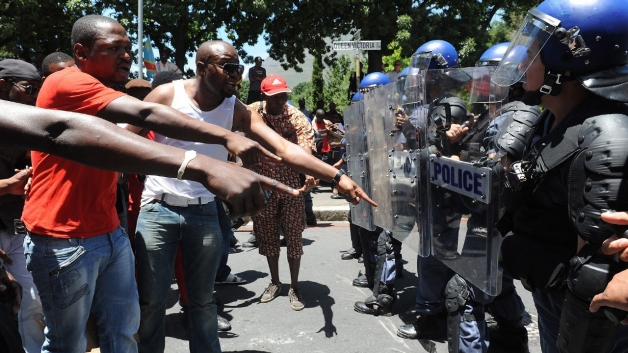 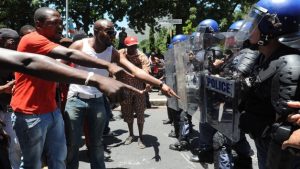 Police in South Africa have fired rubber bullets, stun grenades and water cannon in an attempt to disperse protesters who have gathered outside Jacob Zuma’s offices to call on the president to resign.
Zuma is enmeshed in a series of scandals that critics say are undermining the country’s democracy.
The demonstrations in the administrative capital of Pretoria came as a judge ordered that a state watchdog report into alleged influence peddling be released by 3pm GMT.
Earlier in the day, Zuma withdrew a bid to block the release of the report, which focuses on allegations that a family linked to the president sought to influence some cabinet post selections to benefit its own business interests.
The possibility of new allegations of wrongdoing at top levels of the South African government is likely to increase pressure on Zuma, who apologised earlier this year after the constitutional court said he flouted the constitution in a scandal over more than $20m in state funds used to upgrade his rural home.
Zuma eventually paid back 7.8m rand (£474,268), an amount determined by the national treasury.
In a separate scandal, the director of the National Prosecuting Authority dropped fraud charges this week against the finance minister, Pravin Gordhan, following an outcry among South Africans who suspected the move to prosecute Gordhan was an attempt by government factions to take control of the treasury.
Yesterday, business executives, religious leaders and others gathered in a Pretoria cathedral to demand that the president quit.
They said alleged corruption linked to Zuma was undermining one of Africa’s biggest economies, which is experiencing weak growth, as well as a constitution that was crafted after the end of white minority rule in 1994.
The Nelson Mandela Foundation has also sharply criticised Zuma, saying that “political meddling for private interests” during his tenure has weakened state institutions, adding: “It is painful for us at the Nelson Mandela Foundation to bear witness to the wheels coming off the vehicle of our state.”
Yesterday, some of the country’s top political cartoonists joined the calls for Zuma to step down, saying it was in the national interest for him to go even though it would mean losing one of their “richest sources of material”.
“It is not possible to turn the situation around” as long as Zuma remains president, said Sipho Pityana of Save South Africa, a coalition that says it seeks to protect the constitution.
Separate rallies were also held in Pretoria by South Africa’s two biggest opposition parties, the Democratic Alliance and the Economic Freedom Fighters. The ruling African National Congress party, which took power after the end of apartheid, lost several key municipalities in local elections in August, partly because of public dissatisfaction with the president.