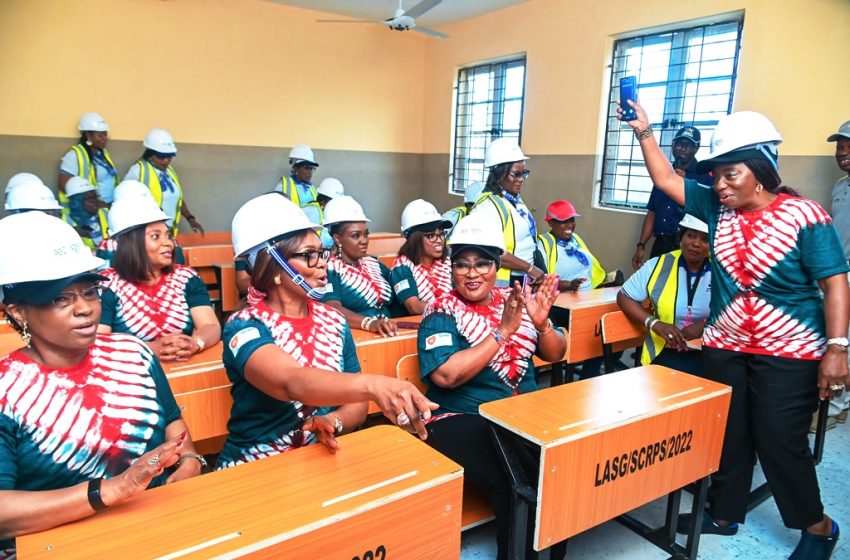 The Southern Governors Wives’ Forum (SGWF) on Monday visited Ogombo Community in the Ajah area of Lagos State to inspect the level of work on the ongoing Secondary School project by the Committee of Wives of Lagos State Officials (COWLSO).

The visit is part of the activities lined up for the SGWF Quarterly Meeting being hosted by Lagos State.

COWLSO, under the leadership of the Lagos State First Lady, Dr. Ibijoke Sanwo-Olu embarked on the project in line with the founding objectives of the Committee to impact lives positively and contribute immensely to the political and socio-economic growth of the state.

Giving a brief on the project, Sanwo-Olu said the secondary school project was necessitated by the need to intervene to address the plights of students who require secondary school education in the Ogombo community.

“We have the policy to deploy the proceeds from the COWLSO Conference to complement the efforts of the State Government, particularly in promoting child healthcare and education, empowering women, and generally improving the welfare of Lagosians.

“Before now, there was no senior secondary school in Ogombo and so in partnership with the Lagos State Special Committee on Rehabilitation of Public Schools (SCRPS), we decided to intervene. Our intention in coming up with this project is to give the people of Ogombo a befitting school that has all the modern facilities.

“Aside from the staircase, you can see that there is a ramp for the physically challenged that runs from the ground floor to the first floor and the second floor, and also the toilets are accessible for them. This is not very common with public schools and so the Southern Governors’ Wives are here to give their blessings,” she said.

Speaking on behalf of the Southern Governors’ Wives, SGWF President and Wife of Osun State Governor, Mrs. Kafayat Oyetola said the project was laudable, and a clear attestation to the commitment of COWLSO to impact lives positively.

“This is a very great development. I really appreciate Dr. (Mrs.) Sanwo-Olu for this project. I have been attending the National Women’s Conference of COWLSO since 2004 and I am proud of what COWLSO is doing to impact lives positively.

“Some organizations like yours will make money and they will not use it for the people. However, COWLSO is deploying their proceeds to the benefit of the children in Lagos State and I really appreciate the good job they are doing.

“We have gone round. The ramp for the physically challenged is the first I will see in this country; I have never seen any of such before in our public school. Just yesterday, I was talking to a friend who has a child with a disability and she was narrating her ordeal and the difficulty they go through in accessing education. However, with this ramp here, there will not be any difference between the physically challenged students and other students in terms of accessing any part of the school and it is a good one,” Oyetola said.

She encouraged members of COWLSO to continue their good job, while also praying that Lagos State will continue to experience growth and development in all areas.

Among others, the facilities in the school are a Ramp for the physically challenged students, three laboratories for Physics, Chemistry and Biology, 10 Classrooms, Staff Rooms, Principal’s Office, Vice Principal’s Office, Library, Sick Bay, ICT Centre, Modern Toilets, and other sets of toilets specifically designed for students with special needs.

Members of the SGWF also visited the Lagos State Motherless Babies Home, Lekki where the Lagos First Lady donated some items including a 50-inch smart television, an industrial washing machine, cartons of noodles, and diapers, among others.