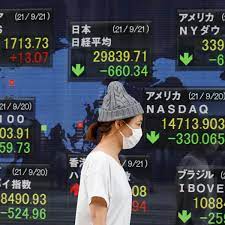 The stock market fell in volatile trading on Tuesday after Russian President Vladimir Putin ordered troops into two breakaway regions in eastern Ukraine, a move that was met with a new round of sanctions from the West, as some officials warned that ‘the invasion of Ukraine has begun.’

According to Forbes, global stock markets took a hit after Russian President Vladimir Putin decided to recognise the separatist states of Donetsk and Luhansk in eastern Ukraine, ordering Russian troops to move into the region in order to maintain peace.

The move was widely condemned by the West, with the European Union and United Kingdom both unveiling economic sanctions against Russia on Tuesday, while the United States also unveiled sanctions targeting Russia’s elite, banks and sovereign debt.

Many western officials continued to warn that Russian troops moving into eastern Ukraine to keep the peace could be a not so subtle pretext for a full invasion, with U.K. Health Minister Sajid Javid saying on Tuesday that “the invasion of Ukraine has begun.”

Oil prices surged on the news, with Brent crude rising up to $94 per barrel amid concerns that Russia’s energy exports could be disrupted.

Investors also digested a slew of corporate earnings: Shares of Home Depot fell over 5.5 per cent after earnings, while Macy’s gained over 8 per cent thanks to strong results as well as the announcement of a share buyback and dividend increase.

“The Russia/Ukraine situation remains very fluid, and tensions remain high, and in the short term that will remain a headwind on stocks,” according to a recent note from Tom Essaye, founder of Sevens Report.

The conflict in Ukraine and subsequent market declines should not distract the Federal Reserve from hiking interest rates as it looks to combat surging inflation, Wharton finance professor Jeremy Siegel told CNBC.

“It would be a big mistake if the crisis reduced the amount of tightening we need to control inflation,” he said, adding, “I think the Fed rate hike is 10 times as important as what’s going on in Russia right now.” Other Wall Street experts are similarly warning that if the Federal Reserve raises rates too quickly that could spark a sharp economic downturn, market turmoil and even the next recession.

Russia-Ukraine tensions have continued to weigh on markets, with all three major averages recently posting back-to-back weekly losses. The Dow fell 1.9 per cent last week, while the S&P 500 lost 1.6 per cent and the Nasdaq 1.8 per cent.