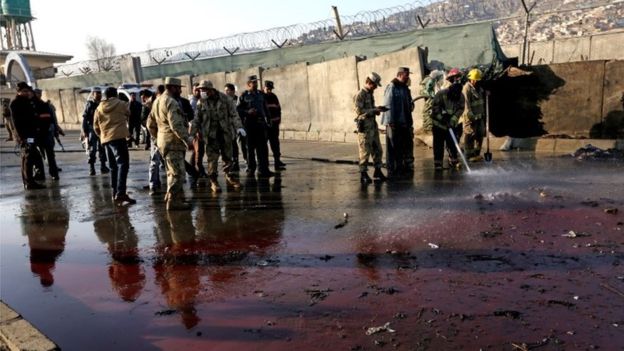 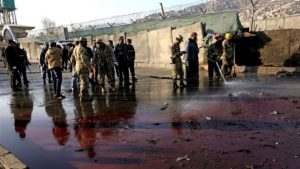 A massive suicide blast at a Shiite mosque in Kabul killed at least 27 people Monday and wounded 35 as worshippers gathered for a religious ceremony, officials said.
The attacker was among worshippers inside the mosque when he detonated the bomb, senior police official Fridon Obaidi said, giving the toll.
Interior ministry spokesman Sediq Sediqqi said the blast occurred around 12.30 pm (0800 GMT). Police cordoned off the area around the Baqirul Olum mosque in the west of the Afghan capital as ambulances rushed to the scene.

“I heard a blast and dust covered the whole mosque,” said worshipper Nadir Ali.
“When the dust settled down, I saw the mosque was full of flesh and blood. I was injured in my waist and had to crawl out of the mosque.”
“I was in the mosque, the people were offering prayers. Suddenly I heard a bang and windows broke. I had no idea what had happened. I rushed out screaming,” another worshipper, Ali Jan, told AFP.
President Ashraf Ghani said in a statement he strongly condemned the “barbaric” attack.
Mosques in Kabul generally do not have any security — though police patrols can be seen near some on Fridays — and some eyewitnesses criticised the government over the lack of protection Monday.
“They know that Daesh (IS) who is able to conduct attacks in Europe, can reach places in Afghanistan easily. They should provide security to sacred places,” said one man who gave his name as Rahmat.
No group has yet claimed responsibility for Monday’s blast.
Worshippers were gathering for the major Shiite ceremony of Arbaeen, marking the end of a 40-day mourning period after Ashura, which commemorates the death of Imam Hussein.
Hussein, grandson of the Prophet Muhammad, was assassinated in the year 680. His fate laid the foundation for the faith practised by the Shiite community, a minority in mainly Sunni Muslim Afghanistan.
Millions of Shiite Muslim pilgrims gather each year in the holy Iraqi city of Karbala for the Arbaeen pilgrimage, one of the world’s largest religious events. Officials there have said they expect up to 20 million visitors this year.
The pilgrimage is seen as a major potential target for sectarian attacks.
Earlier this year a powerful blast targeting Shiites during Ashura killed 14 people in northern Afghanistan. It followed twin attacks claimed by the Islamic State group, that also targeted Shiites and killed 18 in Kabul.
In July, IS jihadists claimed responsibility for twin explosions that ripped through crowds of Shiite Hazaras in Kabul, killing at least 85 people and wounding more than 400 others.
The bombings marked the deadliest single attack in the Afghan capital since the Taliban were ousted from power in a 2001 US-led invasion.