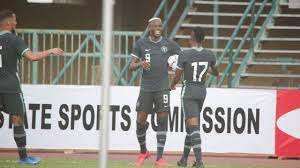 The Super Eagles celebrated their return to Lagos after 20 years with a 3-0 defeat of the Crocodiles of Lesotho yesterday, at the Teslim Balogun Stadium, Lagos. The match was Nigeria’s final game in the Cameroun 2022 African Cup of Nations qualifying series.

From the onset, Nigeria swooped on the hapless Crocodiles, who were already out of the race for Cameroun before kick off, with Victor Osimhen the tormentor-in-chief.

Osimhen opened scoring in the 22nd minute of the first half in the game watched by a scanty crowd as prescribed by the Confederation of African Football (CAF). Two more goals from Oghenekaro Etebo (51st minute) and Paul Onuachu (83rd minute) sealed any hope the Crocodiles had of ending the day on a respectable note.

Though, the Eagles had already qualified even before they took on the Squirrels of Benin Republic last Saturday in Porto Novo, the coach Gernot Rohr tutored Eagles to make sure they finished the campaign on a high note. Nigeria had 14 points in the qualification race to Cameroun.

With drums and music coming from all three supporters clubs, the Eagles made the game a colourful house party against the Crocodiles, who had vowed to turn the table against Nigeria in Lagos.

As it was in the match against the Squirrels in Porto Novo, Onuachu came from the bench to score the third goal with a right foot bullet to secure all the points. The win further restored the Nigerian team’s winning mentality.

It will be recalled that a brace by Victor Osimhen and one each by Alex Iwobi and Samuel Chukwueze steered the Eagles to a 4-2 win over the Crocodiles when both teams met in Maseru 16 months ago.

Also on a winning note was former Super Eagles midfielder, Patrick Pascal, who was given the keys to a three-bedroom flat by Lagos State Governor, Babajide Sanwo-Olu.

The Guardian learnt that the England-based players in the team left for their clubs shortly after the game, while the other players are expected top leave today.