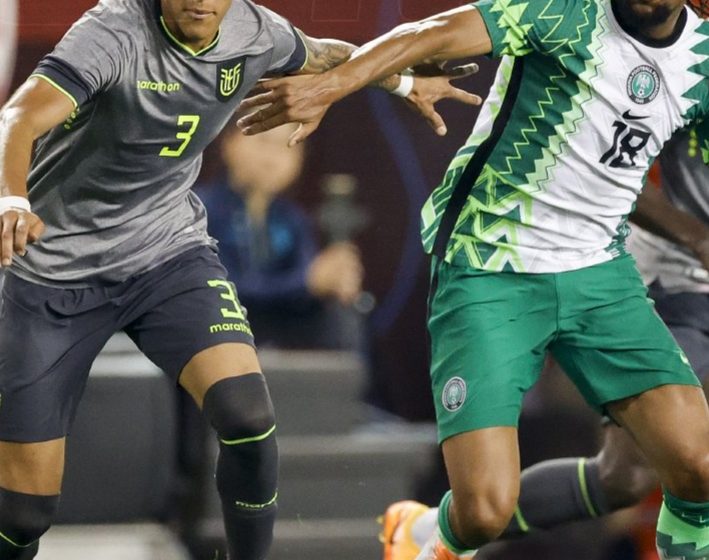 The Super Eagles were on the losing side again after going down 1-0 to Ecuador in their second friendly game played in New Jersey, United States in the early hours of Friday

The Eagles made only one change from the starting line-up against Mexico, following the introduction of Faisal Sani for the injured Innocent Bonke.

After a bright start Ecuador took the lead just three minutes thanks to Estupinan who ran on to a swung in setpiece unmarked before heading past a stranded Francis Uzoho.

The Eagles had a shout for a penalty in the 14th after Terem Moffi looked to have been brought down after rounding the Ecuadorian keeper but the referee blew for a goal kick.

Ecuador continued to create chances and almost went 2-0 up following a brilliant curler from Jose Cifuentes but Uzoho tipped the goal bound strike over for a corner.

In the 30th minute Semi Ajayi had the Eagles best chance but saw his header saved on the line by the Ecuadorian keeper.

Before the commencement of the second half, the Eagles made two chances with Ola Aina and Emmanuel Dennis replacing Sani and Chidozie Awaziem.

Just three minutes into the second half it was Ecuador who went close for a second goal but Uzoho got down well to stop a low shot.

In the 50th minute Moffi tried a low strike on the edge of the box but the opponent keeper made a good save.

Emmanuel Dennis should have drawn the Eagles level on 57 minutes following a superb cross from Bassey but he blazed his effort over the bar from close range.

Bassey went close for the Eagles on 62 minutes with a long range shot which Ecuador keeper saved.

Few minutes later Dessers was played through on goal and came face to face with the keeper but couldn’t go past him.

In the 69th minute Moses Simon floated in a corner but Ajayi’ s header landed on the roof of the net.

The Eagles continued to push for the equaliser and were almost rewarded on 80 minutes as Dessers met a corner with his head but saw his effort go inches wide.

Ecuador had a chance to double their lead in the 82nd minute but Uzoho pulled a great save before the rebound was blazed over the bar.

With two minutes left Uzoho pulled another great save as he got down quickly to palm away a low shot.