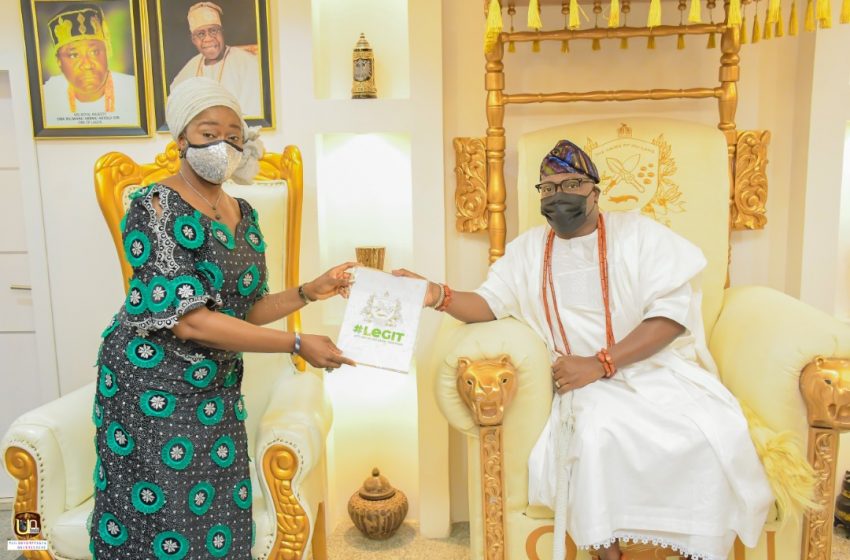 The Oniru of Iru Kingdom, Oba Omogbolahan Lawal, Abisogun II presenting the “LEGIT” document to the former First Lady of Benue State, Mrs. Yemisi Suswam who paid the Oniru a courtesy visit at his palace in Lagos.

Wife of the former Governor of Benue State, Gabriel Suswan, Architect (Mrs.) Yemisi Suswam has commended the Oniru of Iru Kingdom, Oba Omogbolahan Lawal on his achievements so far in the Kingdom.

Suswan who made this known when she paid a courtesy visit to the Oniru at his Palace in Iru, Victoria Island, Lagos explained that she was not surprised with the level of development that had been brought to Iru Kingdom since Oba Lawal’s ascension to the throne given his expertise.

According to her, being one of the youngest kings to rule Iru Kingdom, Oba Lawal has come with visions, ideas, expertise, experience and exposure which would set the Kingdom apart for greatness.

“I will tell you I’m rating from far because I don’t live around Iru kingdom but knowing his antecedents, knowing where he’s coming from, his pedigree; I am not surprised with what I am seeing in the Palace. I can see lots of transformations here.

“I know the way he has started thus far, he’s doing great. I’m not surprised. I will keep saying it, I’m not surprised. If you know who Kabiyesi is and who he has always been, and the kind of backbone that he has in Olori Mariam Lawal, you would know that this is a good pair that will go a very long way. They’re very liberal, open, hospitable and very simple and humble. You can see what I’m talking about. There’s no air, they are down to earth.

“You can tell that he is one of the youngest that has come. He has come with a clean slate, visions, ideas, expertise, experience and exposure. I have no doubt that the kingdom and the country will enjoy him,” Suswam noted.

She stated that she was confident that if Oba Lawal continued the way he was going, the Kingdom would continue to expand.

“I’m so glad that I came. You know, when they were given the office; when he was sworn in and crowned, some of us were not able to make it because of the COVID-19 pandemic.

“I wish His Royal Highness the very best in his reign. We will never cease to pray for him. We pray that he isn’t just a success, but he leaves a legacy that generations unborn will talk about and celebrate,” Suswam averred.

The former First Lady wished Oba Lawal the very best in his reign adding that she will continue to pray for him in order to leave a legacy that generations unborn will talk about and celebrate.