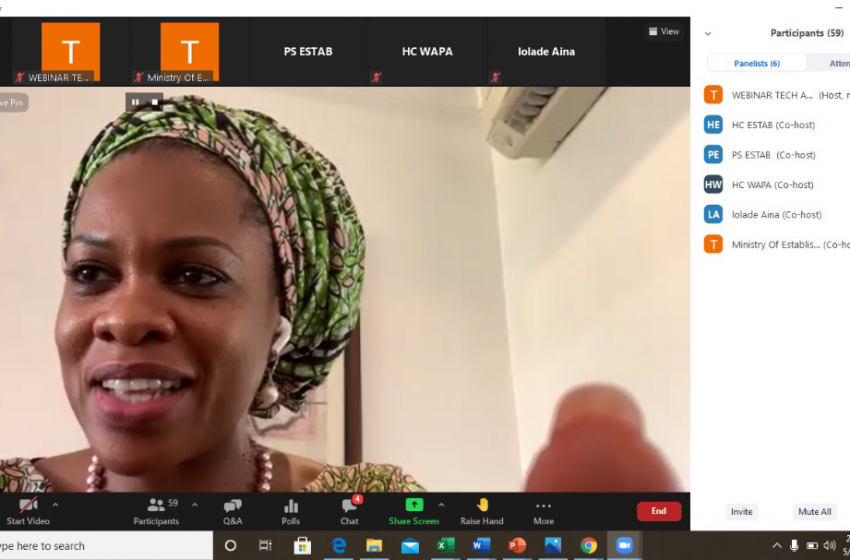 The role of teamwork cannot be overemphasized in the quest to achieve the Greater Lagos Agenda, as teamwork engenders development and improves productivity, the Commissioner for Women Affairs and Poverty Alleviation (WAPA), Mrs. Bolaji Dada, has said.

The Commissioner made this known during the monthly Lagos State Ministry of Establishments Training and Pensions webinar series tagged “EXCO SHARES 5.0”, an initiative of the Office of Establishments and Training designed to foster knowledge-sharing between members of the Executive Council and Public Servants on the transformation agenda of the present administration.

Speaking on the Topic “Lessons from Ants”, she stressed that there is a lot to learn about the value of teamwork as it relates to the ant species, noting that ants don’t just leave their “fellow ants“ alone when carrying huge objects, pointing out that they help each other, making it possible for them to achieve their goals.

In her words, “A single ant can only do so much but when they work as a team they can achieve greater things. This particular kind of teamwork when applied to our jobs will make our various MDAs process work seamlessly, which will in effect make the Greater Lagos Agenda achievable”.

Dada reiterated the need for synergy among various MDAs, including cabinet members as well as the public service, to actualise the T.H.E.M.E.S development agenda of the administration of Governor Babajide Sanwo-Olu,  adding that through teamwork the vision of the State Government is achievable.

Outlining further benefits of teamwork, the Commissioner stated that it improves productivity as teams that work together are more productive and motivated. Also, it helps people to communicate better, form synergy, increases innovation, team bonding, enhances flexibility, overcomes obstacles and builds trust amongst others.

Some of the “Lessons from Ants”, according to her, includes flexibility, stressing that ants find a way to overcome changes by leveraging on flexibility, hence the need for everyone to have a mindset of problem-solving.

Mrs. Dada emphasised that the need to save for a rainy day just like ants because one can never tell what might happen in the future, therefore having reserves will surely help cope with unforeseen occurrences.

The Commissioner for Establishments, Training and Pensions, Mrs. Ajibola Ponnle, thanked the members of the State Executive Council in attendance for their various contributions, as well as the participants, urging them to make judicious use of the “Lessons from Ants” and apply it to their work-life to boost the efficiency and productivity in the public service.

Earlier in his welcome address, the Permanent Secretary, Office of Establishments and Training, Dr. Abiodun Onayele, stated that there is a lot to be learnt from Ants that people regard as pests, stressing that the “Lessons from Ants” can be used as a capacity-building technique to improve the work-life of the Public Service.