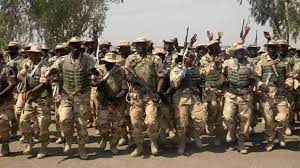 The military on Monday began an operation in the South-East as part of efforts to address rising insecurity in the region.

The Army indicated this at a press conference in Awka, the Anambra State capital as soldiers and policemen  paraded the streets of Owerri, the Imo State capital, in a show of force on Monday.

In Enugu, the Enugu State capital,  hoodlums had a field day as they were on the rampage in the process of enforcing the sit-at-home order which  the Indigenous People of Biafra said it had suspended.

There has been worsening insecurity in the South-East since the IPOB leader, Nnamdi Kanu, was arrested in June.

Last week, nine persons including Dr Chike Akunyili, the widower of the late Minister of Information, Prof Dora Akunyili, were  killed  by gunmen at Nkpor in the Idemili North Local Government Area of Anambra  State.

On Monday, violence continued in Enugu where  hoodlums attacked and set ablaze a tricycle for allegedly disobeying the  sit-at-home order.

It was gathered that hoodlums operating in a Hilux van moved round some parts of Enugu on Monday morning to enforce the sit-at-home order.

The sit-at-home continued to take its toll on the businesses and social activities in the state.

Residents of the state once again stayed in their homes while some miscreants continued to create fears by attacking those who disobeyed the sit-at-home order.

It was gathered that a tricycle was set ablaze  at Amachi Road Junction, Agbani Road despite security assurances by the state government.