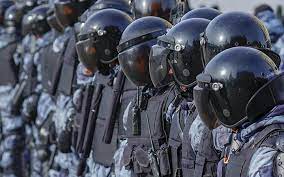 Thousands of people have been detained at protests in dozens of cities across Russia against President Vladimir Putin’s unprovoked war in Ukraine, the Russian Interior Ministry and an independent protest monitor said on March 6.

The monitor OVD-Info said 4,888 people were detained during protests in 69 cities as of early on March 7. In Moscow, the number detained was at least 2,319, OVD-Info said. It added that police departments may have more detainees than appear on their published lists.

“The screws are being fully tightened — essentially we are witnessing military censorship,” Maria Kuznetsova, OVD-Info’s spokeswoman, told Reuters by telephone from Tbilisi. “We are seeing rather big protests today, even in Siberian cities where we only rarely saw such numbers of arrests.”

Check out RFE/RL’s live briefing on Russia’s unprovoked invasion of Ukraine and how Kyiv is fighting and the West is reacting. The briefing presents the latest developments and analysis, updated throughout the day.

In other regions, 1,200 people took part in rallies and as many as 1,061 people were detained, she said.

Thousands of protesters chanted “No to war!” and “Shame on you!” in Moscow and St. Petersburg, according to videos posted on social media by opposition activists.

Demonstrations also took place outside Russia, including in India and Kazakhstan after jailed Kremlin critic Aleksei Navalny called for worldwide protests against the war.

In Kazakhstan’s biggest city, Almaty, some protesters warned that “Kazakhstan will be next if the war is not stopped now.”

About 100 people attended a demonstration in Vladivostok and some 15 of them were arrested, a correspondent for the independent newspaper Novaya Gazeta reported. Some of the protesters were holding placards and were chanting anti-war slogans.

RFE/RL could not independently verify the information.

Russian authorities warned on March 5 that they would prevent any attempt to hold unsanctioned demonstrations.

The demonstration in Almaty on March 6 drew hundreds of protesters, who waved Ukrainian flags and chanted slogans against Putin and the war in Ukraine.

Daulet Abylkasymov, a protest organizer, told the rally that their demonstration “is not against the Russian people but is against Putin.”

Others warned that “what’s happening in Ukraine today may happen in Kazakhstan next.”

With reporting by Reuters and TASS

All Of The Latest News

Third Round Of Talks Between Ukraine, Russia Begin With Humanitarian Corridor As Main Topic

A third round of talks between Russian and Ukrainian negotiators have begun as the two sides seek a path to end Moscow’s unprovoked invasion of its neighbor.

Several Russian television channels have been hacked and had their programming substituted with coverage of the war in Ukraine by independent broadcasters Current Time and Dozhd TV, outlets blocked in Russia by the authorities.

Russian forces have shot and killed the mayor of the Ukrainian town of Hostomel, local officials say, as he was distributing bread to residents trapped by Moscow’s unprovoked invasion of Ukraine.

ELISTA, Russia — Unknown attackers have burned a car belonging to rights activist and vlogger Maksim Tsedenov in Russia’s Republic of Kalmykia in an arson attack that he says is linked to his activities.

U.S. President Joe Biden is due to hold a video conference on March 7 with the leaders of France, Germany, and Britain to discuss “the latest developments regarding Russia and Ukraine,” the White House said.

Kyrgyz NEXT TV Reporters Questioned Over Report On War In Ukraine

BISHKEK — Two journalists from NEXT television in Kyrgyzstan have been questioned by the State Committee for National Security over a recent report from the media outlet on Russia’s invasion of Ukraine that officials alleged may have incited interethnic hatred.

‘Truth Is On Our Side’: Ukrainian Artillery Unit Targets Russian Forces

‘Truth Is On Our Side’: Ukrainian Artillery Unit Targets Russian Forces

Tehran says there has been significant progress in talks with the United States on an agreement to swap prisoners.

The International Court of Justice says it will rule “as soon as possible” after ending a hearing into a legal move by Kyiv to stop an unprovoked invasion of Ukraine by Russian troops despite Moscow’s rejection of the proceedings.

Russia’s demand for guarantees that sanctions it faces over the Ukraine conflict will not hurt its trade with Tehran has raised uncertainty at talks to revive Iran’s 2015 nuclear deal with world powers.

A third round of talks between Russian and Ukrainian negotiators have begun as the two sides seek to a path to end Moscow’s unprovoked invasion of its neighbor.

Netflix and TikTok suspended most of their services in Russia over Russia’s crackdown on reporting about Russia’s war in Ukraine.

The suspensions followed a decision earlier on March 6 by the U.S. charge card company American Express to drop its operations in the country due to Russia’s invasion of Ukraine.

The music director and principal conductor at Moscow’s Bolshoi Theater has announced his resignation over pressure to take a position on the Ukraine conflict.

Ukraine has informed the International Atomic Energy Agency (IAEA) that management at the Zaporizhzhya nuclear plant is under orders from the commander of Russian forces controlling the site.

U.S. Secretary of State Antony Blinken has pledged Washington’s support to Moldova, a small, Western-leaning former Soviet republic that is contending with an influx of refugees from neighboring Ukraine.

A third round of negotiations between Kyiv and Moscow was scheduled to take place on March 7 after an attempt to evacuate civilians from the besieged Ukrainian city of Mariupol failed on March 6.

Ukrainian negotiator David Arakhamiya announced the talks on Facebook. Ukrainian and Russian delegations have met twice in Belarus since Russia invaded Ukraine on February 24, but cease-fires agreed during those talks to allow civilians to flee have failed to hold.

Russian-backed separatists and Ukrainian officials accused each other of failing to establish the humanitarian corridor out of Mariupol, a Black Sea city that tens of thousands of people want to flee.

The number of refugees fleeing the war in Ukraine was expected to reach 1.5 million on March 6, as the Russian invasion entered its 11th day with “fierce” fighting taking place in many parts of the country.

Turkish workers at the Gemont factory in Russia’s Tatarstan region have protested that their U.S.-dollar pegged salaries are being paid using an exchange rate from before the ruble plunged in the wake of Russia’s invasion of Ukraine on February 24.

Russian President Vladimir Putin has said that punitive sanctions imposed by Western countries following Russia’s invasion of Ukraine are “akin to a declaration of war” and warned that any country that attempts to impose a no-fly zone over Ukraine would be considered a party to the conflict.

Why A No-Fly Zone Over Ukraine Probably Won’t Fly

How Russians Reacted When We Showed Them Pictures From Ukraine

Latest episode
Podcast: War And Chaos
Podcast: The Week Ahead In Russia
Subscribe