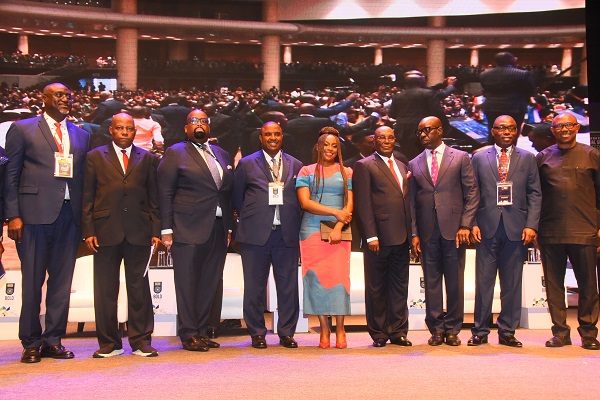 Presidential candidates of the All Progressives Congress (APC) Asiwaju Bola Tinubu, Peoples Democratic Party (PDP) Atiku Abubakar and Labour Party (LP) Peter Obi yesterday rolled out their plans on the economy and insecurity, two of the most critical problems confronting the country.

They were guests at a plenary of the ongoing 62nd Nigerian Bar Association Annual General Conference (NBA-AGC) in Lagos.

The conference theme is Bold Transitions, while the session theme was: Democratic transitions in 21st Century Nigeria: 2023 and beyond.

Nigerians have been reeling under tough economic conditions, with inflation at over 19 per cent, an all-time high in 17 years, according to the National Bureau of Statistics (NBS).

There have been frequent terror attacks, including kidnapping for ransom, insurgency, killings and farmer-herder clashes, among others.

But the presidential candidates sounded confident they would solve the problems if given the chance in 2023.

They also sold their plans on how to revamp the economy.

The keynote speaker, novelist Chimamanda Ngozi Adichie, said Nigeria must get its leadership choice right at the poll next year.

The session, moderated by former NBA president Olisa Agbakoba (SAN), had an estimated 13,000 lawyers in attendance physically or virtually.

He said he (Shettima) would use his eight-year experience tackling Boko Haram in Borno to deal with banditry and insurgency.

According to him, the strength of the country’s armed forces is abysmal relative to its challenges and compared to its peer countries.

He believes Nigeria’s troops need to be boosted to at least 960,000.

Shettima said: “I want us to juxtapose two scenarios. At the end of the unfortunate Nigerian civil war, the Nigerian Armed Forces ballooned to 250,000 combat troops.

“Our GDP was $455million and our total number of troops was 213,000. The percentage of our GDP that is spent on the military for security was only 0.5 per cent.”

He noted that Nigeria’s “peers across the world” such as Iraq, Israel and Turkey spend far higher percentages.

He argued that the Tinubu-Shettima ticket was the best combination to tackle Nigeria’s economic, security and other challenges because of their vast experience.

The former Borno State governor said his combination with Tinubu, if elected next year, will replicate the “wonders” they performed in Borno and Lagos states.

Shettima said: “Nigerians have the capability to see through the worn-out rhetoric and sophistry of pretentious politicians.

“Nigerians should follow the man wey know the road. From day one, we will hit the ground running. We’ll promptly address the issue of the economy, ecology, and security.

“We have the antecedents. I built some of the best schools in Nigeria. Go to Borno and see wonders; you will never believe that it is a state in a state of war.

“So, we are going to replicate our achievements in Lagos, Borno and some of the frontline states so that our nation will be a better place. The fundamental issue is pure leadership.”

Shettima urged Nigerians to consider the strengths of a Tinubu presidency as exemplified by the latter’s performance as Lagos governor and his skillset.

“He is a city boy, I am the golden boy,” Shettima said.

Reflecting on the poor state of the Lagos economy before 1999, he emphasised Tinubu’s successes in transforming the its finances.

“Now, Lagos is earning N51billion every month as its internally generated revenue. Lagos is the third largest economy in Africa,” he said.

Shettima said beside establishing an “excellent track record for performance”, Tinubu has also “mentored men and women who are excelling in different fields of human endeavours.”

He credited himself with excelling as a staff of Zenith Bank in Lagos and elsewhere, adding that he had also “mentored men who are excelling in different fields of human endeavour.”

On their economic plans, Shettima said an “important tool of growing the economy”, is “diversification of sources of our income”.

The conference was also aired live.