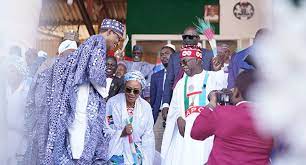 residential candidate of the All Progressives Congress, Bola Ahmed Tinubu, on Tuesday flagged off his presidential campaign in Jos, Plateau state amid crowd fracas.

Although the cause of the crowd trouble was not clear, visibly angry supporters were recorded throwing objects in the air.

Speaking during the flag-off, Tinubu said the 2023 election is a fight to define the soul of the nation and “determine our collective fate.”

“Do we adhere to the ideals of broadly shared prosperity, competence, peace, justice and compassion toward all?” He asked.

“Or do we toss these ideals away, lashing ourselves to the divisive politics of the past or to those whose rantings show they cannot distinguish between fact and fantasy.”

President Muhammadu Buhari and other APC bigwigs were present at the campaign flag-off.

“I am deeply honoured for the presence of His Excellency, President Muhammadu Buhari,” Tinubu said.

“As campaign chairman, he promised to lead from the front. A man of his word, President Buhari has done what he said and more.”

Speaking at the flag-off, President Buhari reiterated his earlier commitment to ensuring that every vote counts, according to a statement signed by presidential spokesperson, Garba Shehu, said.

“No election winner will be denied his mandate, irrespective of the party to which they belonged,” apparently in response to the Campaign Director-General, Governor Simon Lalong who announced the intention to recreate the SDP-Moshood Abiola historic victory in 2003 in a campaign that took off in the same city 30 years ago. That election victory was annulled by the military.

“In handing the APC flag to the candidate at the tumultuous occasion, President Buhari said the country needed a man like Asiwaju Bola Tinubu, urging the party faithful to campaign on issues and the abilities of our candidate and his running mate, Senator Kashim Shettima,” Shehu’s statement added.

“The President reiterated his earlier assurances that he will be at the forefront of this campaign because of his belief in the party.

“The President said it is only the APC that can steer Nigeria to fulfill its historic purpose adding that working together with the leadership of the party, the campaign council, and its teeming supporters, the goal will be achieved.

“The Chairman of the party, Senator Adamu led other party stalwarts, including Asiwaju Bola Tinubu to call on Nigerians to vote for the APC ticket which is the surest way to the prosperity for the country.”