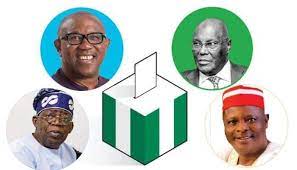 The presidential candidates of the All Progressives Congress, Asiwaju Bola Tinubu and his Labour Party counterpart, Mr Peter Obi, on Monday sought northern support for their ambitions to succeed the President, Major General Muhammadu Buhari (retd.) in 2023.

The two candidates unfolded their agenda on restructuring, insecurity, economy, power and corruption.

While Tinubu shared how he planned to address the age-old problem of almajiri (pupils of Islamic schools) in the north, if elected in the 2023 election, Obi highlighted his vision for the economy.

The two candidates unveiled their plans at an interactive session with the Arewa Joint Committee, which was held at the Arewa House, Kaduna.

At the forum were leaders of the Arewa Consultative Forum, Northern Elders Forum, Sir Ahmadu Bello Memorial Foundation, Jamiyyar Matan Arewa, the Centre for Historical Development Research, as well as the Arewa Research and Documentation Project.

Dressed in a light blue agbada with his trademark cap, Tinubu assured the northern leaders of Nigeria’s indivisibility, noting that the restructuring of the country required consensus.

Broaching the issue which has been a sensitive and contentious subject between the Northern and Southern regions, the APC flag bearer explained that state police and fiscal restructuring are constitutional matters requiring consensus or broad support.

He acknowledged that the Northern governors and traditional rulers recently endorsed the restructuring of the country in response to the security crisis ravaging their region, after opposing it for decades.

“I must say here that restructuring means different things to different people. That is why those who didn’t understand the meaning of restructuring did not even follow up on the very good job done by (Gov Nasir) El-Rufai on this,’’ he noted, referring to the 24-member APC Committee on True Federalism chaired by the Kaduna State governor.

But assuring the northerners of his determination to resolve the agitation while upholding national unity, Tinubu explained that the consensus on restructuring would require the input of critical stakeholders, including the council of state, legislature, judiciary, state governments, traditional institutions and groups.

According to the APC chieftain, his aspiration to lead the country is a testimony to his belief in the unity and indivisibility of Nigeria as a country.

Tinubu pledged to resource the security agencies and enhance the welfare of their personnel to secure the nation.

‘’We will mobilise resources to enhance the welfare of personnel and provide the right equipment and training required for them to secure us all. We will sustain ongoing efforts of increasing the boots on the ground, commensurate to our geography and population.

‘’This recruitment will be tailored to suit the need for specific cadres and expertise for each organ of the security architecture. What I can guarantee you is that throughout this period, I am making you a promise that will be fulfilled,’’ he vowed.

The former Lagos state governor threw a jab at Atiku, his challenger for the top job, describing himself as a pan-Nigerian, having traversed every part of the country.

Atiku had stirred controversy and attracted criticisms for asking the Arewa Joint Committee to support him as a northerner, stressing that the North did not need a Yoruba or Igbo candidate in a veiled reference to Tinubu and Obi.

But slamming Atiku for playing the ethnic card ahead of the 2023 presidential election, Tinubu stated, “You start from Uyo and now ended up in Kaduna and you are speaking to North that you are the right candidate for the North, how do we reconcile that. You have lost the election.

“I am one of you. Yes. I am a city boy from Lagos,” he added to approving gestures from the audience.

Tinubu went further to say that the PDP presidential candidate ought to have endorsed him for the presidency, instead of contesting with him for the same position, having supported Atiku’s presidential bid in 2007.

“It’s payback time; Let Atiku endorse me instead of campaigning in Kaduna. I supported him in 2007,” he stated.

Under his government, the candidate vowed that bandits would cease to exist, noting that “the rag-tag bandits will not defeat us. We will defeat them.”

Tinubu said if elected as president, he would mobilize all assets ‘’within our national power” to secure Nigeria.

“As you are aware, security is a function of resources.  I am committed to mobilising all assets within our national power to Secure Nigeria. We did this in Lagos through many initiatives, especially the Security Trust Fund, through which we addressed many needs of our security forces which helped to sanitize Lagos State.

“As you may recall, when I assumed office as governor in 1999, the situation I met was basically a case of banditry where urban gangs ruled the streets.

“I returned law and order, tamed what could have been a huge ethnic war and made Lagos one of the safest states in Nigeria. I will replicate that across the country.

“Under my leadership, the Nigerian military will receive a much-needed injection of trained personnel to strengthen the heroic efforts of the troops that are currently in service,’’ he further pledged.

Citing the security funding he initiated as governor, Tinubu stated, “We will address the welfare and training needs of our security personnel and strengthen our security institutions with modern technology and equipment to better position them to respond to modern challenges that we face in a fast-changing world.’’