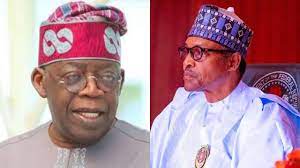 The former Lagos State governor, who was joined by the party’s ex-Interim National Chairman, Chief Bisi Akande, later addressed reporters after the closed-door meeting in Abuja.

He pleaded with Nigerians to join hands with the Federal Government in sustainably addressing the nation’s myriad of problems.

According to him, the prevailing insecurity is not peculiar to Nigeria, adding that finding solutions, through consultations, was urgently needed to change the narrative.

Tinubu said his visit was “to generally review widespread perceptions and focus more on securing the country. We have to exchange views so that a better Nigeria emerged. That’s all.”

He continued: “The best way is what we are doing – coming together to reduce banditry, move for unity and be able to bring a better Nigeria to the people. The welfare of our people is extremely important. And yes, every nation will go through these curves and difficult times. How we communicate them to the people and the areas of need make it easier for people to bear. Those are ideas on how to change the leadership of the country.

The party chieftain identified cooperation, understanding, determination, effective security, and information as some of the ingredients needed to overcome the current quagmire.

On the speculated unhealthy relationship between him and the President, the ex-governor insisted that their friendship remained “very close, cordial, frank and honest.”

Regarding the 2023 transition and the chances of the APC returning as a ruling party, the national leader said: “I don’t want to predict that one right now. I don’t want to do that subject now. The chances are as bright as a midnight (morning) star. We’ll continue to work for a better Nigeria and that’s what you need.

“We cannot inject politics and assumption into everything. We have a nation to build, we have a baton to pass. You can depend on Buhari that he would not spend one hour beyond his tenure. He wouldn’t do that. He would comply with the constitution.”