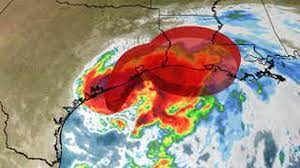 Hurricane Nicholas made landfall early Tuesday over the Gulf Coast of Texas before being downgraded to a tropical storm, lashing weary residents with powerful wind gusts and driving rain as it moved toward Houston.

The center of the storm made landfall just after 12:30 a.m. Central time on the eastern part of the Matagorda Peninsula, about 10 miles west-southwest of Sargent Beach, according to the National Hurricane Center. Nicholas, which has maximum sustained winds of 70 miles per hour, is moving north-northeast at nine m.p.h., the center said.

Early Tuesday morning, about 375,000 customers in Texas were without electricity, according to CenterPoint Energy’s website, which said that extended power outages were likely in the Houston area. Forecasters expected the storm to weaken as it moves toward southeastern Texas on Tuesday and southwestern Louisiana on Wednesday.

Nicholas was expected to bring up to a foot of rain to parts of coastal Texas, the center said, raising concerns for flash flooding. Warnings of a dangerous storm surge extended east to Louisiana, where people are still recovering after Hurricane Ida battered the southern reaches of the state two weeks ago.

At a news conference on Monday night, Harris County Judge Lina Hidalgo said roadways in the Houston area appeared to be mostly clear, and she thanked residents for staying home.

“We can’t let our guard down,” Judge Hidalgo said, adding that strong wind gusts were still a concern.

Zach Davidson, the spokesman for the office of emergency management in Galveston County, said residents should remain cautious — even if the streets look manageable in their own neighborhoods, he added.

“It may be all right where you are, but if you get on the road to go somewhere else and those roads get flooded, it becomes a very dangerous situation,” Mr. Davidson said.

Officials in Louisiana were also mindful of lessons from past storms.

“I know that bracing for another storm while we’re still responding to, and trying to recover from, Hurricane Ida is not the position that we wanted to be in,” Gov. John Bel Edwards of Louisiana said at a news conference on Monday afternoon. “But it is a situation that we are prepared for.”

Nicholas formed on Sunday in the Gulf of Mexico, the 14th named storm of the 2021 Atlantic hurricane season.