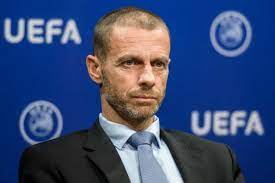 Although the majority of the Super League’s founding members withdrew in the face of public and political pressure following a much-criticised launch last April, the likes of Real Madrid, Barcelona and Juventus remain committed to the project.

Florentino Perez, who was to be named Super League chairman, has continued to call for Europe’s elite clubs to secede from UEFA, insisting the breakaway competition was “still alive” in June.

More recently, Madrid midfielder Toni Kroos backed the stance of the Blancos president by claiming: “It [the Super League] should have been in operation for a long time”.

But Cerferin, speaking at the FPF Football Talks Portugal 2022, emphasised his confidence in the continental game’s existing structure.

“Football, for sure, will stay open in our competition always. The essence of European football, which is by far the strongest football in the world, is that it’s open,” he said.

“What those people who think that only the elite play football don’t understand is that even they would be much worse if they wouldn’t have everyone competing.

“Last season we saw Sheriff [Tiraspol] from Moldova winning in Madrid against Real Madrid. If my Slovenian team with a budget of two million won against Tottenham, that’s the essence of European football. It’s part of our culture. It’s part of our history and it will never change.

“This is the most important part of football and that’s why we are as successful as we are. I absolutely insist and will insist that the dream will stay alive for everyone.”

One of the clubs’ major motivations for looking to break away from UEFA, besides the ability to regulate their own competition, is to arrange more money-spinning contests against other elite sides.

Despite the Super League’s demise, the participants are set to get their wish when the Champions League introduces an additional four group-stage matches for each team from the 2024-25 season.

That change has been met with fierce criticism from some quarters, with the busy nature of the football calendar already a major talking point.