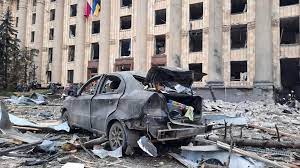 It came after 39 nations called for an inquiry to be opened.

Cities including the capital Kyiv, Kharkiv and Kherson have come under heavy shelling in recent days.

On Wednesday, the mayor of Kherson said Russian forces had seized control of the key port – the first major city to be taken by Moscow since it invaded a week ago.

Earlier this week, the ICC’s chief prosecutor Karim Khan said he planned to open an investigation into events in Ukraine “as rapidly as possible” but the referral from 39 nations – including the UK, France and Germany – allowed it to be launched without the need for judicial approval.

He will look at past and present allegations of war crimes, crimes against humanity and genocide, and will go as far back as 2013, before Russia’s annexation of Crimea the following year.

The ICC prosecutes individuals accused of the most serious crimes concerning the international community, where states cannot or are unwilling to do so.

The court does not have its own police force and relies on state co-operation to arrest suspects. Penalties imposed by the ICC can include prison sentences and fines.

Ukraine’s state emergency service has said more than 2,000 civilians have been killed since the Russian invasion began last Thursday, although the figure has not been independently verified.

The United Nations’ high commissioner for refugees said some one million people had already fled the country.

On Wednesday, the UN General Assembly voted overwhelmingly to demand an immediate end to the invasion of Ukraine.

Just four countries – Belarus, North Korea, Eritrea and Syria – joined Russia in opposing a motion calling for the withdrawal of all occupying forces, while 35 nations abstained.

And in the southern port of Mariupol, hundreds are feared dead following hours of sustained shelling.