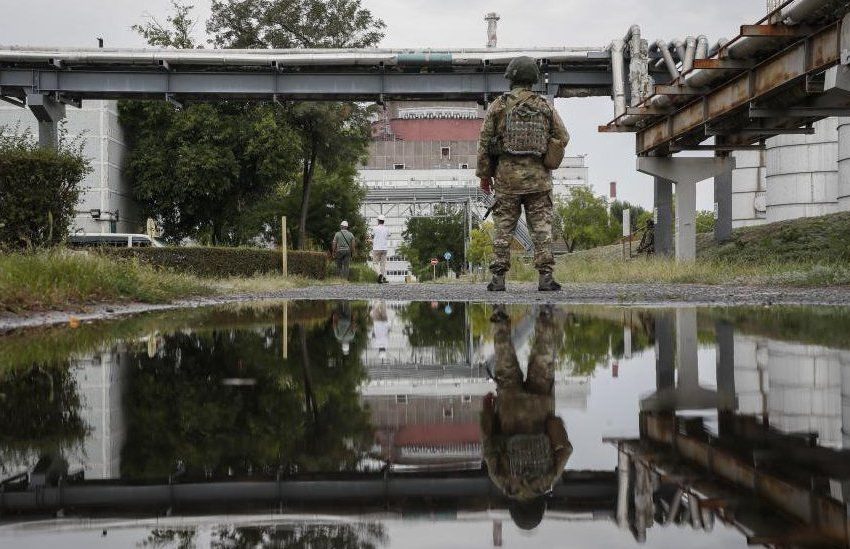 The UN secretary general, António Guterres, has called for a demilitarised zone around the Zaporizhzhia nuclear plant, involving the withdrawal of Russian occupying troops and the agreement of Ukrainian forces not to move in.

Guterres was addressing a UN security council session on Tuesday, at which he supported the recommendations put forward Rafael Mariano Grossi, the director general of the International Atomic Energy Agency (IAEA) who led an inspection visit to the occupied Zaporizhzhia plant last week, and presented a report to the security council. The report confirmed the presence of Russian soldiers and military equipment at the plant, including army vehicles.

“We are playing with fire and something very, very catastrophic could take place. This is why in our report, we are proposing the establishment of a nuclear safety and security protection zone limited to the perimeter and the plant itself,” Grossi said.

Guterres said that, as a first step, Russian and Ukrainian forces should cease all military operations around the plant.

Ukraine’s president, Volodymyr Zelenskiy, offered qualified support for Grossi’s proposal to create a demilitarised zone around the plant and asked for more detail on the plan.

“If the content of this proposal is to demilitarise the territory of the nuclear power plant – and this is logical, as it was the Russian military presence that put the Zaporizhzhia plant on the brink of a radiation disaster – then we can support such a demilitarised protection zone,” he said.

The Russian ambassador to the UN, Vasily Nebenzya, blamed recent shelling of the plant on Ukraine and portrayed Russian forces as protecting the plant. He did not respond to the call for a security zone, a proposal Moscow has so far rejected. Nebenzya said he had not had time to read the IAEA report.

The IAEA report presented on Tuesday said the agency was “gravely concerned” about the “unprecedented” situation at the plant, which is controlled by Russian forces but operated by Ukrainian technicians, and urged interim measures to prevent a nuclear disaster.

The report came as a Russian colonel who served as the military commandant of the occupied Ukrainian city of Berdiansk was reported to have been killed in a car bombing, according to Russian state media reports.

The car bomb reportedly exploded near the city administrative headquarters, which is being used as a Russian base. Photographs showed that the car used by the Russian military official, who has been identified as Col Artyom Bardin, was severely damaged in the attack, which took place close to midday.

Initial reports indicated that Bardin died from his wounds. But Vladimir Rogov, the Russian-appointed administrative head of the Zaporizhzhia region, said in a Telegram post written just after 8.30pm on Tuesday that the colonel continued to “fight for his life”.

“Thank God, information about the death of the commandant of Berdyansk Artyom Bardin is not confirmed. Despite severe injuries, explosive leg amputation and massive blood loss, he is alive. Doctors continue to fight for his life,” he said.

Russian officials have alleged that Ukrainewas behind the attack. If true, it would be the most significant assassination yet of an official working for the occupational government of Russia in Ukraine.

At least two Ukrainians collaborating with the Russian government were killed in suspected partisan attacks in August. In one case, the deputy head of the Russian-installed military administration was shot to death in his home in the city of Nova Kakhovka. In late August, a Ukrainian politician from Volodymyr Zelenskiy’s party who had gone over to work with the Russians was killed in the Kherson region.

Ukrainian staff were operating under constant high stress and pressure, especially with the limited staff available, the report said. “This is not sustainable and could lead to increased human error with implications for nuclear safety,” it added.

Britain’s ambassador to the UN, Dame Barbara Woodward, told the security council the Zaporizhzhia staff were “no longer workers, but hostages being held at gunpoint.”

Russian troops seized control of the site in early March and there have been repeated attacks in the vicinity, prompting fears of a nuclear disaster. Moscow and Kyiv have denied responsibility and the report did not ascribe blame for the damage its inspectors had discovered.