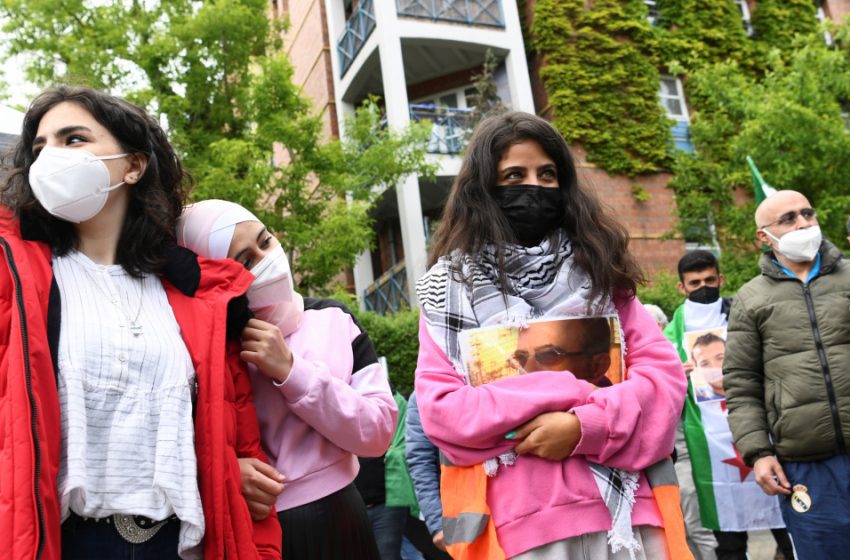 Wafa Mustafa from Syria holds a poster of her missing father in her arms during a protest against re-election of Syria’s President Bashar al-Assad, near Syria’s embassy, Berlin, Germany May 26, 2021. REUTERS/Annegret Hilse

The UN Human Rights Council has called for those behind “massive scale” enforced disappearances in Syria during the past 10 years of conflict to be held accountable.

The resolution, presented on Tuesday by several European countries, the United States, Turkey and Qatar, decried that Syria’s crisis had entered a second decade “marked by consistent patterns of gross violations”.

The war in Syria has killed nearly 500,000 people since it started in 2011, with all sides in the increasingly complex conflict accused of war crimes.

Tuesday’s resolution, adopted with 26 of the council’s 47 members in favour, six opposed and 15 abstaining, voiced particular concern about the fate of tens of thousands of people who have vanished.

The text “strongly condemns the continued use of involuntary or enforced disappearances in the Syrian Arab Republic, and related human rights violations and abuses, which have been carried out with consistency, in particular by the Syrian regime”.

It also criticised enforced disappearances by other parties to the conflict, including the ISIL (ISIS) armed group, but said the Syrian government was the main perpetrator.

The resolution voiced alarm at recent comments by the UN’s independent commission of inquiry on the rights situation in Syria indicating “widespread enforced disappearance has been deliberately perpetrated by Syrian security forces throughout the past decade on a massive scale”.

The investigators indicated such disappearances were used “to spread fear, stifle dissent and as punishment”, and tens of thousands of men, women, boys and girls detained by Syrian authorities “remain forcibly disappeared”.

Presenting the resolution to the council, British Ambassador Simon Manley said the government’s role in such a massive number of disappearances was “simply inexcusable”.

That regime, he said, “has the bureaucratic means to provide information on these disappeared individuals, the means to end the suffering of the families and loved ones of these people”.

“But it chooses not to employ those means. This is a deliberate act of unspeakable cruelty.”

Manley accused Syrian forces of “intentionally prolonging the suffering of hundreds of thousands of family members”.

The resolution demanded “the need for accountability, including for crimes committed in relation to enforced disappearance”, and added “accountability is vital in peace negotiations and peace-building processes”.