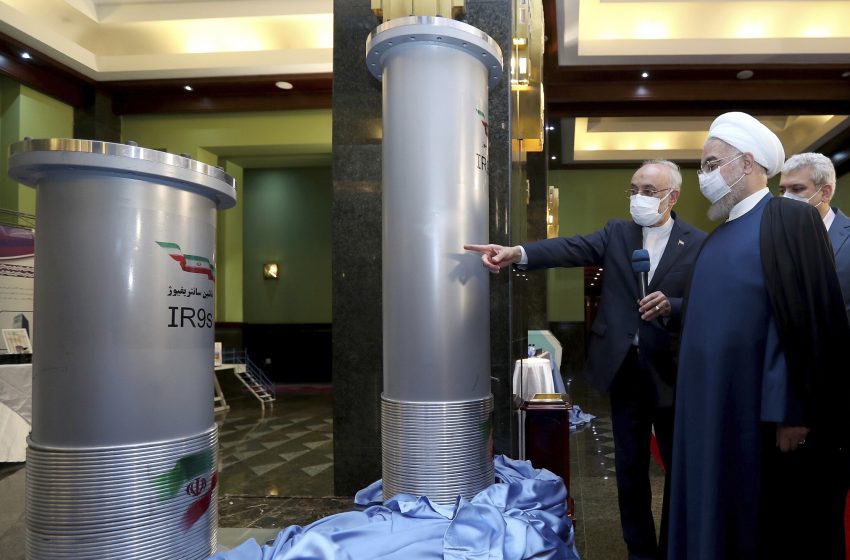 FILE – In this April 10, 2021 file photo released by the official website of the office of the Iranian Presidency, President Hassan Rouhani, second right, listens to head of the Atomic Energy Organization of Iran Ali Akbar Salehi while visiting an exhibition of Iran’s new nuclear achievements in Tehran, Iran. Iran’s president on Thursday offered his most-optimistic assessment yet of ongoing talks to resuscitate his country’s nuclear deal with world powers, claiming there had been “major” agreement among diplomats even as other nations involved suggested challenges remain. (Iranian Presidency Office via AP, File)

The United States and Europe warned Iran to stop nuclear “brinksmanship” and European powers expressed “grave concern” over Iran’s latest moves to enrich uranium, saying it would complicate its return to talks aimed at restarting the 2015 nuclear accord.

The statements from Washington and Brussels came hours after the International Atomic Energy Agency (IAEA) reported that Iran intended to enrich uranium to 20 percent, in the latest sign the talks based in Vienna could be stalling.

“It is worrying that Iran is choosing to continue to escalate its non-performance of its JCPOA commitments, especially with experiments that have value for nuclear weapons research,” State Department spokesman Ned Price told reporters, referring to the joint comprehensive plan of action reached between Iran and six nations on restricting Tehran’s atomic program.

“We continue to urge Iran to stop this brinksmanship, to return to Vienna prepared for real talks, and to be in a position to be prepared to finish the work that we have started in April,” he said.

In a separate joint statement, the foreign ministers of Britain, France and Germany said Iran’s moves were “threatening a successful outcome to the Vienna talks despite the progress achieved in six rounds of negotiations to date.”

An IAEA statement said Tehran had told the agency that it would be sending the enriched uranium to its research and development laboratory at the fuel production plant in Isfahan.

The aim would be to make fuel for a research reactor, the agency added, but the European ministers cast doubt over that claim, calling it a “serious violation” of Iran’s commitments under the 2015 nuclear deal.

“Iran has no credible civilian need for uranium metal R&D and production, which are a key step in the development of a nuclear weapon,” they said.

The latest move takes Iran a step closer to developing materials that could be used to make a nuclear weapon, although Tehran insists it is only interested in the technology to fulfill its energy needs.

Iran has gradually moved away from the terms of the deal it signed with world powers in 2015.

Former US president Donald Trump pulled the US out of the deal in 2018.

The talks in Vienna are aimed at bringing the US, under new President Joe Biden, back into the Joint Comprehensive Plan of Action (JCPOA). Biden has expressed readiness if conditions are met by Iran.

But the talks in Vienna to try and revive the JCPOA have not moved forward in recent weeks and no date has been set for a next round of talks.

“This further step in Iran’s escalation of its nuclear violations is all the more concerning at a time when no date has been set for the continuation of the negotiations in Vienna on a return to the JCPOA,” said the ministers.

Iran should return “without delay” to the negotiations in Vienna in an effort to bring them to “a swift conclusion”, they warned.

“We have repeatedly stressed that time is on no-one’s side,” they said.

Ebrahim Raisi, a new hardline president, is due to take office in Iran on August 3, and its unlikely he’ll give the same backing to the talks afforded by current president Hassan Rouhani.

n to end its nuclear ‘brinkmanship’; Britain, France, Germany express ‘grave concern’ at latest move violating 2015 nuclear pact they are trying to save