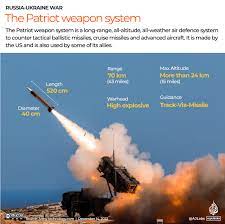 The United States is finalising plans to send its sophisticated Patriot air defence system to Ukraine following an urgent request from Kyiv, which wants more robust weapons to shoot down Russian missiles and drones that have devastated the country’s energy infrastructure and left millions without heating in the bitter cold of winter.

Washington could announce a decision on the Patriot as soon as Thursday, the Reuters and Associated Press news agencies reported, citing US government officials.

“Details later,” he added on his Telegram channel.

Ukrainian President Volodymyr Zelenskyy pressed Western leaders as recently as Monday to provide more advanced weapons to his country. The Patriot would be the most advanced surface-to-air missile system the West has provided to Ukraine.

“These are going to be quite capable of dealing with a lot of different challenges the Ukrainians have, especially if the Russians bring in short-range ballistic missiles.”

Former Russian President Dmitry Medvedev has warned NATO against equipping Kyiv with Patriot missile defences, and it is likely the Kremlin will view the move as an escalation.