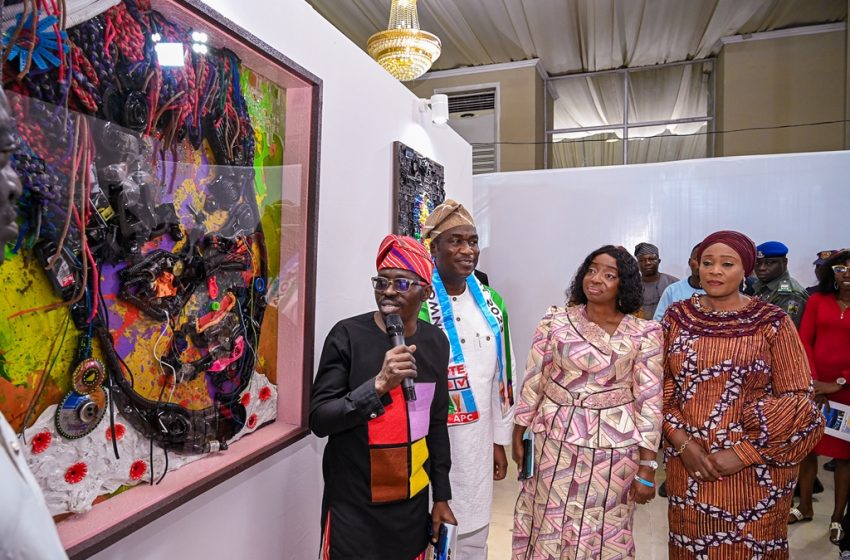 Lagos State Governor, Mr. Babajide Sanwo-Olu on Tuesday emphasized the power of artworks to drive social transformation and serve as a potent vehicle for information and reorientation, calling on artists to deploy their creative skills to fight societal ills.

The Governor spoke at the Greater Lagos Arts Exhibition which was collaboratively organized by the Office of Lagos State First Lady and the State Government through the Ministry of Tourism, Arts and Culture for young artists to showcase their talents, network with their peers and gain from the experience of veterans through mentorship.

Sanwo-Olu, who was represented by the Deputy Governor, Dr. Obafemi Hamzat said since assumption of office in 2019, his administration had left no one in doubt about the desire to fully harness the largely untapped potential of the entertainment sector especially the creative arts component, including supporting and encouraging young talented individuals to grow and gain the exposure required to succeed in line with the THEMES Agenda.

“One of the things the state government has also done is to create what we call the Lagos State Creative Initiative. Using that initiative, we have trained over 3,000 Nigerians in different skills including films, and cinematography, among others and we used private sector experts to ensure that the beneficiaries are exposed to the best,” Sanwo-Olu said.

He explained that the art exhibition, with the theme, “Art in and for Transformation,” was designed to feature knowledge-sharing discussions by highly successful and award-winning professionals and that it was one of the several initiatives being implemented by the state government to realize the objectives for the sector.

“The theme of this event speaks to the power of artworks as potent tools to drive and influence social transformation through the message they communicate.

“This is quite instructive as there is the need to utilize different modes and media to effectively communicate messages and ideas, especially those that are meant to change the orientation of the general public on societal ills and their negative effects on the general wellbeing of the society,” the Governor said.

On her part, the First Lady, Dr. Ibijoke Sanwo-Olu said the decision to collaborate with the Ministry of Tourism, Arts and Culture on the exhibition was borne out of the genuine desire to open up opportunities for visual artists who have proven to stand out in their artistic work, adding that arts had been proven to be a powerful tool which helps people communicate with the outer world and better understand their inner selves.

While commending the enormous contributions of artists to socio-cultural and socio-political development, she also challenged them to use their artworks to speak against ills in society, particularly the menace of Sexual and Gender-Based Violence (SGBV).

“With these special skills, you are a great contributor to the Tourism and Entertainment pillar of this present administration and this also gives you space under the Education and Technology pillar of the THEMES Agenda of the administration of Mr. Babajide Olusola Sanwo-Olu.

“As opinion molders and great influencers of thought, I challenge you to be deeply involved and commit yourself to support this administration in stamping out the menace of Domestic, Sexual and Gender-Based Violence from our society through the use of your artworks as a form of campaign against SGBV,” she said.

She also called on the artists to deploy their talents to fight child labour, sexual discrimination, and discrimination based on disability status, as well as enlighten the people on mental health, among others.

Earlier in her opening remarks, the Commissioner for Tourism, Arts and Culture, Pharm. (Mrs.) Uzamat Akinbile-Yussuf commended the First Lady for her consistency and commitment which, according to her, ensured that the novel Greater Lagos Arts Exhibition becomes a reality.

She said it had been established that art, in its various forms, is good business that deserves every attention and investment that is channeled towards it, adding that the exhibition was part of the intervention of the state government to give visibility to artists and their artworks in order to further deepen the growth of the creative industry.

In a paper presentation on the transformative power of visual arts, Prof. Kunle Filani said it was gratifying that Lagos had been blessed with a string of proactive and patriotic governors including Sanwo-Olu who continues to make transformational changes and promote visual arts.

To further deepen arts, Filani urged the state government to build its own museum and another iconic gallery of contemporary art, as well as embark on the acquisition of diverse artworks by Nigerian artists to decorate significant offices to promote culture and creativity.

He also advised the government to reignite the teaching of visual arts in secondary schools to ensure future citizens who are creative and people who can make use of critical thinking in their professional endeavors.

The event featured an art exhibition by 30 artists, panel discussion and participation of secondary school students.