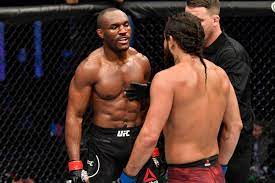 UFC heavyweight champion, Francis Ngannou, says Nigerian welterweight champion, Kamaru Usman, has promised to knock out Jorge Masvidal when both fighters square off at the VyStar Veterans Memorial Arena in Jacksonville on April 25.

Usman defeated Masvidal via unanimous decision in 2020, with the American stating he had less than a week to prepare for the fight.

The ‘Nigerian Nightmare’ is unbeaten since joining the UFC franchise in 2015, raking in 13 wins, including a second round knockout win over former teammate, Gilbert Burns, in his last outing at UFC 258 in Las Vegas in February.

Masvidal, who has had the complement of a full training camp, has not entered the Octagon since suffering the defeat to Usman.

Ngannou says the Nigerian has promised to knock out the American instead of going the distance like he did in 2020.

“Kamaru is upset about the first one, he even promised us a knockout which should be good. I’m excited for the fight, but most importantly, for my brother,” Ngannou told essentiallysports.com.