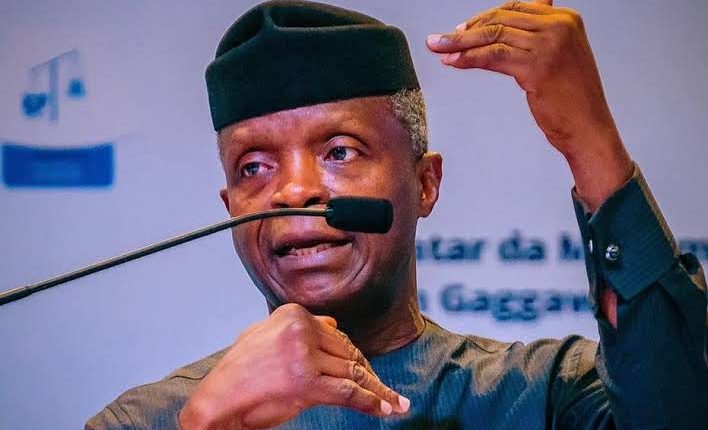 Nigeria’s Vice President, Professor Yemi Osinbajo on Tuesday flagged off the movement of the Torch of National Unity for the 21st National Sports Festival, billed for 28th November to 10th December, 2022, in Asaba, Delta State.

The flag-off ceremony, which took place at the Presidential Villa, Abuja, marked the beginning of the movement of the torch to all the states in Nigeria before it terminates in the host state, Delta.

Prof. Osinbajo said at the event that the Torch of Unity has deep meaning for peace and unity of Nigerians.

He said; “The Torch of Unity, which heralds the festival, symbolises the peace and unity of Nigeria and it’s also meant to create awareness of the festival amongst Nigerians and also the world at large.

“The National Sports Festival is crucial activity in the sporting life of our country and this is because it is the breeding ground, the engine room for the production of the very many outstanding talents that will go on to become world champions.”

He said; “Some of the great champions who we know today were actually discovered at various National Sports Festivals, including the likes of Blessing Okagbare, a world medallist in the 200 meters Olympics and World Championship, and also the medallist in long jump at the Olympics; Chioma Ajunwa, notable for being the first Nigerian to win gold at the 1996 Summer Olympics in Atlanta, and the first black woman to win an Olympic Gold in any field event.

“Of course, you also have Olusoji Fasugba who was the African record holder and gold medallist in the 100 meters event with the time of 9.85seconds until Akani Simbine beat that time in 2021 with a time 9.84seconds…“Then, Lucy Ejike a gold medallist and world record holder at the Paralympics from 2000 in Sydney through to 2021 in Tokyo.

“And Enifiok Udo Ubong, the only Nigerian to win two bronze medals in the 4by 400 meters relay and also silver medal in long jump.

“Of course, the now legendary Toby Amusan, the current World, Commonwealth, African Champion in the 100 meters hurdles. She’s also the recorder holder in these three competitions.”

The VP said; “We are still basking in the euphoria of the outstanding performance of Team Nigeria in the just concluded Commonwealth Games in Birmingham, United Kingdom.”

He said that “the performance of Team Nigeria at this year’s Commonwealth Games in Birmingham, United Kingdom, clearly shows that the progressive agenda of the Nigerian government led by the Sports Ministry in the sports sector is yielding the desired result.”

Professor Osinbajo said the Nigerian government is committed to supporting the sports sector to sustain the height it has achieved.

“We realise that the overall goal of using sports as a tool for meaningfully engaging our young and also for uniting our country is a very sound objective and one that we intend to continue to pursue on a regular and daily basis,” he stated.

Governor of Delta State, Ifeanyi Okow said that the state is working to ensure the success of the Sports festival.

“Because when you win the sports festival continually, you will need competitors.”

Pointing out the challenge posed to the games by the recent flooding that has affected many states, including Delta, Governor Okowa said the lift shift in the date of the sports festival has afforded the state more time to tackle the challenge and plan for the games.

“We are really suffering from a very huge challenge; the flooding that has taken place in many of the states.

“But we are hoping in the next two weeks, maximum three weeks, since the flood waters have started to recede, that it will not in any way create a challenge for movement dse of the games,” Governor Okowa said.

The Minister of Sports and Youth Development, Sunday Dare said the Torch of Unity has continued to unite Nigerians over the years.

He said 16, 000 athletes from the 36 states and the FCT will compete in the sports festival in over 28 different sports for able-bodied and the disabled.