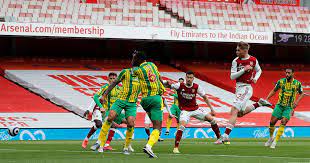 West Brom have been relegated from the Premier League after a 3-1 defeat to Arsenal on Sunday.

The loss leaves Sam Allardyce’s team 10 points away from safety in the English top flight with three games left to play.

West Brom went behind against the Gunners less than 30 minutes into the clash at Emirates Stadium when Emile Smith Rowe struck from close range. Nicolas Pepe doubled the home side’s lead in the 35th minute by smashing into the top corner. Matheus Pereira gave the visitors hope in the second half before Willian wrapped up the points with a late free kick.

It’s not sunk in yet, but I’m sure I’ll wake up tomorrow and realise the situation,” Allardyce told BT Sport. “I’m bitterly disappointed we’re not still in the fight.

“I’m not saying we would have avoided relegation but we should have been closer, we should have taken it down to the last three games, based on how we performed. The creating of chances has been there but the converting has not.

“We had [enough] time to pull it round. Our real problem was not beating the bottom-six sides when we came up against them. The results against Chelsea, Manchester United and Manchester City should have been bonus points.”