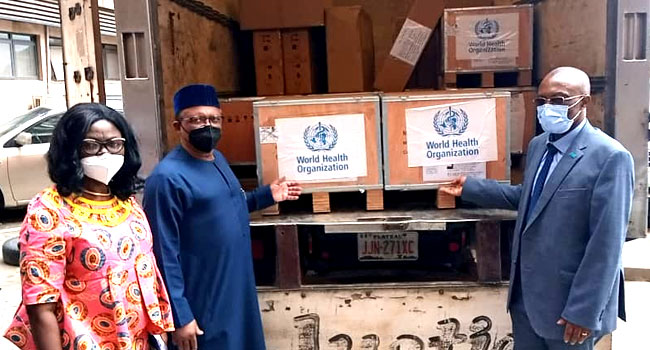 The fight against COVID-19 in Nigeria has received a boost, as the country received 26 ventilators and other equipment from the World Health Organisation.

Nigeria also took delivery of 3,560 fingertip oxygen pulse oximeters as authorities step up efforts to curb the spread of the disease in the period of a third wave.

Minister of Health Dr Osagie Ehanire received the donated items on behalf of the Federal Government on Thursday in Abuja.

“We thank you and appreciate these additional assets as we have to deal with the fears of the third wave of COVID-19,” Ehanire told the WHO’s Country Representative Dr Walter Kazadi, who presented the items to him.

The items were delivered on the same day Nigeria recorded its highest daily infections in six months, amid a strike by resident doctors in the country and growing concerns about widespread protocol violations by citizens.

Dr Ehanire expects the ventilators to come in handy in the race to halt the spread of the pandemic.

“Ventilators are becoming very useful, especially for early response in the period of COVID-19, and even after COVID-19, they will remain assets all over the country,” he said.

Dr Kazadi believes Nigeria has performed relatively well in containing the first and second waves of the pandemic.

He also found Nigeria’s national case fatality rate which he put at 1.3 percent, a level that was half the regional average, encouraging.

With the country now battling the third wave of the pandemic, Dr Kazadi expects it to achieve success in flattening the curve. The WHO is also ready to play its part.

“It is against this backdrop we wish to demonstrate our continued support of the ministry’s efforts in further strengthening the country’s capacity in case management,” he said.

It is the highest in almost six months since February 19 when the nation recorded 1,492 cases – data from the Nigeria Centre for Disease Control (NCDC) revealed.

Four new deaths were also reported, raising Nigeria’s toll from the disease to 2,167 with 165,208 discharged cases out of a total of 176,011 confirmed infections.

The country has received donations from some global bodies and countries in its fight against the pandemic – from vaccines to ventilators.

Dr Ehanire promised that the Federal Government would keep an inventory of the ventilators and assured Nigerians that the items donated will be properly utilised.