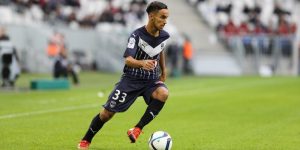 Barely 24 hours after Algeria senior national team named its squad for the Russia 2018 World Cup qualifier against the Super Eagles of Nigeria, what appears a major setback has hit the team.
One of the country’s top strikers, Adam Ounas, who plays for Bordeaux FC in French Ligue 1 was yesterday dropped by Algeria due to injury.
Ounas was named among 18 foreign professionals for the clash in Uyo, Akwa Ibom State on November 12 after he changed his international allegiance to Algeria as he had played for France at age-grade competition.
According to Algeria Football Federation (FAF), the left-sided winger was injured at the weekend in a French Ligue 1 game and team doctors have now chosen not to risk him for the trip to Nigeria.
They have received his medical report from his club, which suggested he would be out for a couple of weeks and as such, there was no need to put his career on the line.
The 19-year-old star scored five goals in 23 appearances for Bordeaux last season, and has made nine appearances in the league this term.
The news of Ounas’ injury was said to have created panic in Algeria football fraternity. FAF is yet to announce a replacement for the uncapped player.