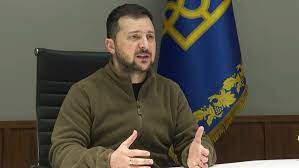 Ukrainian President Volodymyr Zelenskyy has stepped up diplomacy over Russia’s invasion of his country, holding talks with the leaders of the United States, Turkey and France amid protracted fighting on the eastern front of the nine-month-old war.

While Zelenskyy has held frequent talks with US President Joe Biden, French President Emmanuel Macron and Turkish President Recep Tayyip Erdogan since Russian forces invaded in late February, it is unusual for him to hold such discussions over a single day.

“We are constantly working with partners,” Zelenskyy said in his nightly video address, adding that he expects some “important results” in the coming week from a series of international events that will focus on the situation in Ukraine.

German Chancellor Olaf Scholz is due to convene an online meeting with G7 leaders and European Union foreign ministers on Monday to try and agree on further sanctions on Russia and additional aid or arms deliveries to Ukraine.

Successive Russian missile and drone attacks have destroyed much of the country’s energy infrastructure, leaving millions of civilians without power and heating at a time when temperatures are at or below freezing.

Zelenskyy said he had thanked Biden for the “unprecedented defence and financial” assistance the United States had provided and talked about Ukraine’s need for effective anti-aircraft defence systems to protect its people.

“We also appreciate the help that the USA is providing to restore Ukraine’s energy system,” he said.

He said Ukraine would be participating in the G7 meeting and that following the call Kyiv had “coordinated our positions with America”.